Science Cities: São Paulo stands firm (but for how long?)

The Latin American hub carries the scientific weight of a financially stricken country. 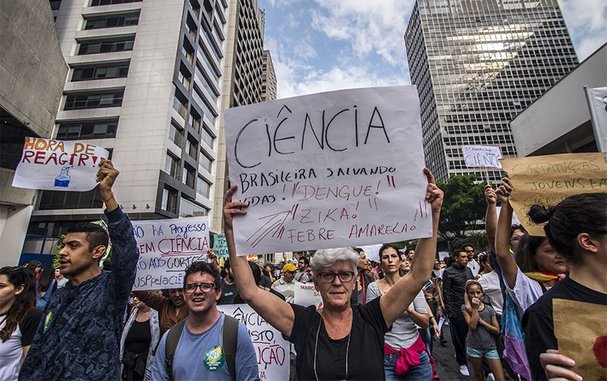 Scientists in Sao Paulo protest against successive cuts to the federal science budget, at a march in October 2017.

Botanist Adriana Grandis thought the Amazon would be the perfect place to continue her research into how tropical trees respond to elevated levels of atmospheric carbon dioxide — if she could only get a beaker to conduct her chemistry analysis.

But it took her two months just to acquire the basic glassware she needed for her project. In addition to the deep bureaucracy stalling research at public institutions in Brazil, the equipment had to come from São Paulo, some 2,700 kilometres away.

After 18 months, in June 2017, her scholarship from the Amazonas State Research Support Foundation was officially cancelled because of a lack of funds, putting an end to her fieldwork. Grandis returned to São Paulo, where she had another scholarship, and plenty of beakers, to continue her research with Marcos Buckeridge, a renowned plant physiologist at the USP Institute of Biosciences. “In São Paulo there is money, and infrastructure,” says Grandis. “Everything just works better here.”

São Paulo, long known as one of the hottest science and technology hubs in Latin America, has become a haven amid the economic ruin stalling scientific research throughout the country. The Ministry of Science, Technology, Innovation and Communications’ budget has halved since 2014 to 4.6 billion reais (US$1.1 billion) in 2018, drastically reducing the funds available for public universities and research institutes across Brazil.

But, scientists in São Paulo have so far been spared the worst of the crisis, shielded by local state policies and a strong network of research-oriented public and private institutions. The question is, how long can the city hold?

São Paulo is the top science city in South America in the Nature Index. Its cumulative fractional count for the six years since 2012 was 473.35, a metric that accounts for the contribution of São Paulo-based authors to the 82 high-quality research journals tracked by the index. Its strengths are in the physical sciences.

The city’s enormous metropolitan area, with 21 million inhabitants, hosts some of the largest and most productive universities in Brazil, including USP and São Paulo State University (UNESP). Overall, there are more than 30 institutions in the city with a strong research focus, and just as many more universities and colleges that primarily engage in education and technical training.

São Paulo is home to important research institutes, such as the Butantan Institute, a leading centre for biomedical research and vaccine production, and the National Center for Research in Energy and Materials, which is finalizing construction of the largest project in Brazilian science, a fourth-generation synchrotron light source, called Sirius.

A few hours’ drive away are the National Institute for Space Research in São José dos Campos, and the Federal University of São Carlos, among others.

Some 20% of Brazilian scientists are based in the state of São Paulo. A third of the scientific articles in the index published by Brazilian researchers have at least one author from São Paulo.

Most of Brazil’s economic elite is also here, with wall-to-wall high-tower offices sprawling along Paulista Avenue, an economic and political thoroughfare in the centre of town.

Connecting industry and the scientific community is what many consider to be the city’s biggest asset: the São Paulo Research Foundation (FAPESP). Created in 1960, the foundation is entitled by the state Constitution to 1% of all local taxes. The funds are transferred on a monthly basis, to be reinvested in scientific research and technological innovation.

Almost every Brazilian state has an equivalent foundation, with similar funding arrangements, but not all state governments pay their dues as diligently as São Paulo’s do. FAPESP is widely recognized for its administrative efficiency and scientific rigour. And because São Paulo is the richest state in the country, FAPESP is also the richest foundation of them all, with a budget in 2017 of 1.34 billion reais.

For comparison, the Research Support Foundation for the State of Rio de Janeiro (FAPERJ) is constitutionally entitled to 2% of state taxes, which should translate to an annual budget of some 550 million reais. But the state has been on the verge of economic collapse since 2016, forcing FAPERJ to freeze research grant payments and only honour scholarships.

Carlos Henrique de Brito Cruz, a physicist from the State University of Campinas, an hour’s drive northwest of São Paulo, who has been scientific director at FAPESP since 2005, credits the state government for upholding its commitments to FAPESP. They know that investment in science and technology is good for economic development, he says.

“We are often accused of having FAPESP on our side,” as if it represents an unfair advantage, says Sergio Novaes, a theoretical physicist at UNESP and member of the Compact Muon Solenoid Collaboration of the European Organization for Nuclear Research (CERN), in Switzerland. Scientists, academics and industry professionals won’t tolerate any messing around with FAPESP, he says. It is “something we built and work hard to maintain.”

Novaes has contributed to more than 130 papers in the index since 2012, alongside many other São Paulo physicists who collaborate with CERN. Their contributions included the discovery of the Higgs boson in 2012. Novaes says such long-term, high-profile international collaborations are only possible because of the funding stability provided by FAPESP and São Paulo’s economic strength. FAPESP is also a member of the Giant Magellan Telescope project, a mirror telescope under construction in Chile and run by an international consortium.

The state universities “have a critical mass of scientists and students to produce good science,” says Paulo Artaxo, an atmospheric pollution and climate change researcher at USP’s Institute of Physics, who has contributed to close to a dozen papers in the index journals in the past three years.

Since 1996, FAPESP has been running a young investigator programme that offers four-year funding for maverick researchers to come to São Paulo and set up laboratories. Over the past two decades, the programme has supported more than 1,500 young scientists, some of whom have become very successful.

One example is Helder Nakaya, a computational systems biologist at USP’s School of Pharmaceutical Sciences. He gave up an assistant professor position at Emory University in the United States to return to Brazil in 2013. The conditions for research in São Paulo are “as good as in any Ivy League school” in the US, he says.

Nakaya has led several projects on the mechanisms of vaccine-induced immunity in infectious diseases, such as malaria, schistosomiasis and the flu. One of these projects, funded by the Bill and Melinda Gates Foundation, involves using cell phone GPS data to identify hotspots for malaria transmission.

But scientists warn that the situation in São Paulo is not sustainable. FAPESP cannot hold together the entire state’s research ecosystem on its own forever.

As funding for science collapses at the federal level, competition for state scholarships and grants increases. A retraction of the state economy over the past three years has meant that tax revenue, and the amount of money brought in through the 1% quota, is also shrinking.

“It’s much harder to win money from FAPESP now than a few years ago,” says Artaxo, who is concerned about São Paulo’s ability to stay scientifically afloat without federal assistance. “This is bad; we can’t live in isolation.”