Emerging trends are explored in this commentary on high-impact research outputs across 245 cities. 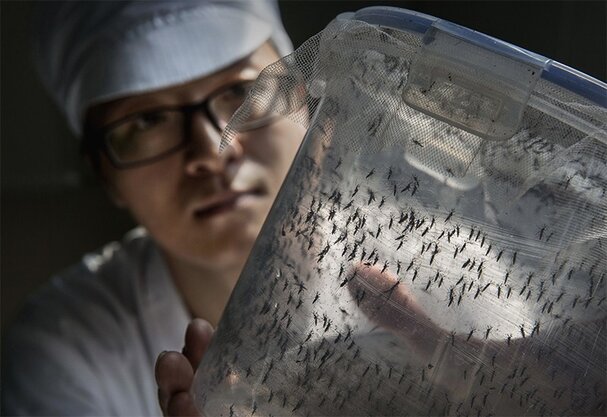 A researcher with mosquitoes at the Sun Yat-Sen University-Michigan State University Joint Center of Vector Control for Tropical Disease in Guangzhou, China.

Two trends are emerging as science globalization accelerates: the spread of research hubs beyond the traditional concentrations of Boston, London and Paris, and a rapid increase in international collaborations.

The established science city powerhouses face fierce competition from newcomers such as Beijing, Shanghai, Seoul, Tehran and Istanbul, backed with funding from national governments determined to see their institutions rise through the global rankings.

But, the challengers still lag in terms of research impact related to citations, according to our analysis of the ‘high-impact ratio’ of 245 cities and their international collaborations between 2014 and 2016.

The high-impact ratio is the ratio of highly cited papers from a city’s research institutions to their total publication output. (Highly cited papers are those that perform in the top 1% of papers by field and publication year based on the number of citations received.) For inclusion in our data set the cities must have each produced at least 10,000 Web of Science (SCIE/SSCI) publications.

The advantage of our high-impact ratio metric for comparing the efficiency of research production between cities is that the fraction of highly cited papers among total publications is independent of city size.

However the metric has limitations. The effect of English should be noted: cities in which English is the principal language, as a group, have high-impact ratios 50% greater than the rest.

Our analysis revealed wide variation in the high-impact ratio between cities and across their international collaborations. An increase in international collaborations was largely driven by partnerships between cities with low ratios and those with high ratios, especially those in northern America (US and Canada). This trend, though likely to accelerate, may be affected by rising US–China tensions, Brexit, and the COVID-19 pandemic.

Science-funding systems and access to research findings are opening up, both through the open-access movement and the increased mobility of researchers. The global scientific research landscape is also changing as emerging economies strive to become more knowledge-based. Funding streams have allowed emerging science cities to increase their share of global research output.

However, our analysis revealed that very few of the emerging cities reached the 1.8% average of our 245 cities for our metric of high-impact ratio. Most are still falling behind global leaders. In the period we studied Beijing produced a greater number of highly cited papers than any other city, but its high-impact ratio, at 1.4% was 184th of 250. In our period of study, the ratios of the top US cities were twice as high as those of the top Chinese cities, although we expect that gap to have narrowed.

The established science centres of Europe and the United States continued to produce a greater proportion of high-impact articles than their Asian challengers in the period 2014 to 2016. The average high-impact ratio of Chinese cities was well below the average for our 245 cities, at 1.1%.

For the 97 EU cities analysed it was 2.0%, and in northern America (64 US and 10 Canadian cities) it ranged from 1.2% to 4.2%. US university towns (for example, Princeton, Pasadena, Stanford, Berkeley and Cambridge, Massachusetts) had the highest ratios globally (other than Jeddah, Saudi Arabia, a special case).

The larger northern American cities (New York, Los Angeles, San Francisco, Vancouver and Toronto) where high-impact ratios ranged from 3.4% to 2.5%, still outperformed the best Asian metropolises on this measure, such as the top three; Singapore (2.4%) Shenzhen (2.1%) and Hong Kong (1.9%).

The top 245 cities were engaged in more than 7,800 collaborations in 2014 to 2016. The largest group of international collaborations involved northern American and EU cities: (27.9% of all links).

We classified international collaborations into quarters based on their high-impact ratios (Q1: top 25%, Q2: below the top 25% and above median, Q3: below median but above the lowest 25%, Q4: the lowest 25%). Northern American−EU city pairs were the strongest, producing almost half of the links in Q1, with a ratio of 10.1% and above.

It is a fundamental strategy for institutions in cities with low ratios to establish collaboration with counterparts in cities producing higher impact research; in the case of China, at least, this is a deliberate strategy fostered by the central government (L. Wang et al.* Scientometrics* 113, 765–781; 2017).

For instance, the number of co-authored papers between academics at institutions in Beijing and New York increased from an average of 14 per year in the period 1994 to 1996 to 712 per year in 2014 to 2016; a similar scale of growth is evident in other partnerships of cities with wide gaps between their high-impact ratios.

Partnering with high-performing institutions in northern America gave authors outside those places a greater chance of achieving high citation impact. However, the option was not as attractive to academics in the northern American cities themselves: their institutions tended to participate in fewer international collaborations.

In some particularly competitive fields producing high-impact papers (for example, in particle physics and brain research), US cities were unlikely to collaborate internationally, even with their traditional European partners.

Both leading Asian countries and the European Union are highly committed to increasing their research impact, but face different challenges.

The EU wants to strengthen research collaborations across member states, but the increasing participation of less-efficient eastern European city institutions, held back by decades of isolation, has reduced publishing efficiency as measured by high-impact ratios.

The international collaborations between UK cities and ones in continental Europe had the greatest high-impact ratios within the EU. But the UK’s departure from the EU casts a shadow over their future.

For China, scientific cooperation with the US, currently under pressure because of intensified political and trade tensions, is of crucial importance.

The endogenous development of the Chinese research landscape cannot replace the US/China contribution to Chinese high-impact research output in the foreseeable future. Growing tensions with the EU and the United Kingdom also point to challenges ahead for Chinese cities in securing international scientific collaborations resulting in high-impact research papers.