From antibiotics and organoids to CRISPR, improved biomedical methods and apparatus are enabling new therapies. 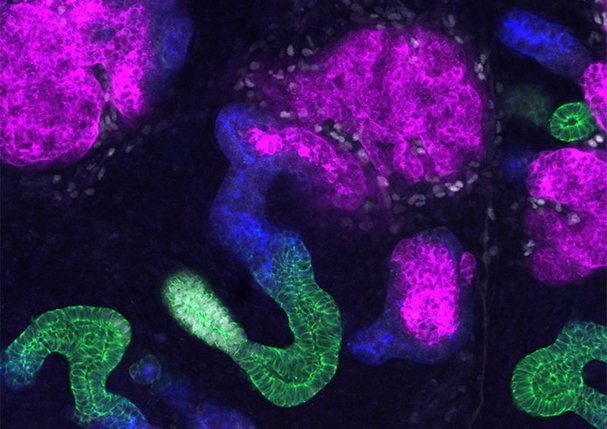 Organoids mimic the early stages of major organs and tissues.

The term ‘organoid’ didn’t exist a decade ago. Now it’s a buzzword in biomedical science for a three-dimensional multi-cellular structure or ‘mini organ’. Thanks to advances with pluripotent stem cells (PSCs), organoids are expected to enhance the understanding of organ function and disease, revolutionize methods of drug screening and personalized therapy, and reduce reliance on animal trials of drugs for humans.

PSCs are cells that can be made from any human cell, such as a skin cell or a white blood cell. In the same way as more ethically controversial embryonic cells, they can then be used to recreate just about any other cell type. In laboratory conditions they can also be coaxed to self-organize into three-dimensional organoids to mimic the early stages of major organs and tissues.

In a major advance published in Nature in 2015, human PSCs developed into the more than 20 different cell types present in the human kidney and arranged themselves into a model of that highly complex organ. This research showed that complicated tissues could be formed in a laboratory by letting the cells ‘talk’ to each other to form a complex structure, according to the paper’s senior author, Melissa Little, a stem-cell biologist at the Murdoch Children’s Research Institute in Melbourne, Australia.

PSC-derived organoids and protocols for making complex tissue have since been developed for many other organs, including the oesophagus, lung, stomach, colon, pancreas, liver, intestines, thyroid, eye, and even brain.

Although organoids are a good model of developing tissue, Little wants improved methods that, with the aid of bioengineering, will make these early tissues “grow up in the dish” for further study. In 2018, she and collaborators transplanted a human organoid into a mouse where blood vessels formed into it and it began to mature.

If more mature tissues and organs can be created in the laboratory for use instead of animal models “it may be possible to avoid developing drugs that ultimately don’t work in human trials”, Little says. — by Jennifer Cooke

In 1987, a peculiar family of DNA sequences uncovered in Escherichia coli bacteria was nothing more than a fascinating quirk with murky biological significance, if any. Within three decades, it led to a biotech discovery of huge importance.

The repeating DNA sequences, known as CRISPRs, when paired with the Cas9 enzyme, have the remarkable ability to cut and paste snippets of DNA as an antiviral defence.

The revolutionary gene-editing system known as CRISPR–Cas9 has been deployed to fight cancer and HIV in animal models as well as to engineer drought-resistant crops and mosquitoes that self-destruct. It has also been at the centre of the biotech controversy of the century to date, when Chinese geneticist, He Jiankui, announced in late 2018 the birth of the world’s first human babies with CRISPR-edited genes.

Although CRISPR–Cas9 is cheap, powerful and efficient, it’s not perfect. It can cause large and unpredictable off-site genetic modifications. Researchers are now tweaking Cas9 in an effort to reduce the error rate.

Less-invasive applications of CRISPR are also being explored, as researchers pursue the diagnostic potential of a system that can identify the presence of a specified disease without editing the genome. Urine, blood and saliva-based tests are now being developed to rapidly detect diseases such as Ebola, Zika virus and lung cancer.

One such diagnostic tool, SHERLOCK, works by dipping a piece of paper into a processed blood sample to reveal the presence of certain molecular targets in the body, similar to a pregnancy test. SHERLOCK is powered by the enzymes Cas12a (also known as Cpf1) and Cas13. The system can signal the presence of as many as four diseases at once by cleaving additional strands of synthetic RNA upon hitting its target.

Developed by researchers at the Broad Institute of MIT and Harvard in Cambridge, Massachusetts, SHERLOCK is extremely flexible and remarkably inexpensive — each test costs just US$0.61. “There are very exciting applications for this approach for bacterial and viral detection, human genotyping, cancer detection, point-of-care detection and agricultural applications,” says biomedical engineer, Omar Abudayyeh.

SHERLOCK is one of an increasing number of CRISPR devices being built with enzymes other than Cas9. The momentum for discovery is growing. A Cell paper that first announced the potential of Cpf1 in 2015 has been ranked 30th by field citation ratio among the top biomedical sciences articles in journals tracked by the Nature Index, providing an enticing lead as researchers chase the next generation of spin-off technologies. — by Bec Crew

During the golden era of antibiotic discovery from the 1940s to the early 1960s, most of the microbes in soil or marine sediment that could grow in a Petri dish were mined out. Pathogens have since developed resistance against every one of them. Synthetic substitutes compounds have been no more successful in overcoming resistance.

In the global race to find new antibiotics to overcome this problem, several promising developments have occurred.

One of them dates to 2009, when biologists Slava Epstein and Kim Lewis at Northeastern University in Boston, Massachusetts, collaborated to develop the iChip. This is a device in which individual bacterial cells can be isolated then left to grow into colonies in situ in soil, with access to soil nutrients provided through a semi-permeable membrane. This cultivation platform provided a doorway to the other 99% of ‘microbial dark matter’ — an untapped source of new antibiotics in nature — that had been previously inaccessible to standard cultivation in laboratories.

Epstein and Lewis went on to start a company, NovoBiotic Pharmaceuticals in Cambridge, Massachusetts, which took their work significantly forward. NovoBiotic discovered teixobactin, a compound belonging to a new class of antibiotics that binds to two cell-wall components. The bonus was that some bacteria may not easily develop resistance to teixobactin. The paper describing these findings, published in Nature in 2015, is among the top ten most influential biomedical sciences articles of the past three years in journals tracked by the Nature Index.

Since then, NovoBiotic researcher, Amy Spoering, has discovered another compound with a similar mode of action to teixobactin. Other new compounds have also been found.

Later in 2019, Lewis and colleagues expect to announce the discovery, via an approach different to the iChip, of their third new antibiotic. This one will target a more troublesome group of bacteria, including E. coli, Pseudomonas aeruginosa, and Klebsiella pneumoniae. According to Lewis this is the area of greatest need, as some species of this group of bacteria have resistance to multiple or even all known antibiotics.

Thanks to such positive developments, Lewis is more optimistic now than before 2015 that a solution to the antibiotic resistance crisis will be found. But “there is still a long way to go”, he says, “because the pace of discovery is modest”. — by Jennifer Cooke

Hitting the reset button on cancer

CAR T-cell therapy can prime the body’s immune system to repel cancers, but the prohibitive cost of creating treatments from living cells limits their use. Genetically edited versions could make the therapy more affordable.

The modern pharmaceuticals industry has been dominated by two classes of therapeutics: chemically synthesized small-molecule drugs that make up most of the market; and more expensive, protein-based biologics. Cellular therapy has now emerged as a third contender, setting the stage for powerful new vaccines, regenerative heart medication, and major advances in cancer treatment.

Cellular therapies harness the properties of living cells to offer treatments far beyond the scope of traditional therapeutics. The most advanced is CAR T-cell therapy, hailed for delivering extraordinary improvements in cancer patients for whom conventional treatments have failed.

CAR T-cell therapy can reprogram the body’s immune system to thwart blood cancers, such as leukaemia and lymphoma. It works by extracting some of the patient’s T cells (part of the immune system) and equipping them with synthetic chimaeric antigen receptors (CARs) — receptor molecules that bind to certain proteins on cancer cells. These modified CAR T cells are then injected back into the bloodstream, where they are able to provide a more targeted anti-tumour response.

But, although CAR T-cell therapy has seen response rates of more than 90% in clinical trials for B-cell acute lymphoblastic leukaemia, many patients relapse, and the side-effects can be dire. Kymriah and Yescarta, the only FDA-approved drugs on the market cost about US$475,000 and $373,000, respectively, per single-dose therapy.

Those stratospheric costs reflect the challenge of manufacturing consistent, scalable products based on living cells: delicate and distinct entities that respond in unpredictable ways to their environment.

Another hurdle is treating solid tumours, including lung, breast and prostate cancers. Such malignancies harbour genetic profiles of much greater complexity than blood-based tumours, making it difficult to determine which antigens to target.

But, as researchers from the Sloan Kettering Institute in New York City note in a 2017 Nature study, the revolutionary gene-editing technology, CRISPR–Cas9, could prove a powerful ally for CAR T-cell therapy, potentially bring down the cost.

“Fewer CAR T cells will be needed to treat diseases if they are better engineered from a genetic standpoint,” says Sloan Kettering immunologist, Michel Sadelain.

In addition to engineered T cells, cancer researchers are exploring the functionality of cell-based ‘super-vaccines’, which are still in the early stages of development.

Based on dendritic cells, which process potentially harmful substances and present them to the T cells to attack, these vaccines could potentially override cancer’s ability to suppress the body’s natural immune response.

Research could also lead to cell therapies for cardiac disease. In particular, human pluripotent stem cells could be used to create regenerative heart medications that reverse tissue damage and trigger protective responses. Like the other cell-based treatments, it’s an extremely challenging, but potentially transformative endeavour. — by Bec Crew