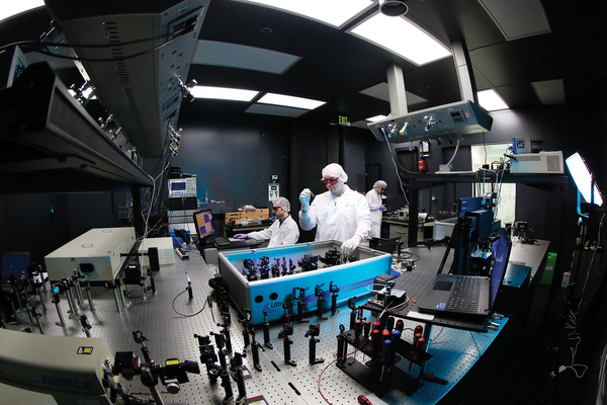 The Solar & Photovoltaics Engineering Research Centre at KAUST is among the university's many endeavours aimed at finding alternative energy sources.

In a troubled region, Saudi Arabia is capitalizing on its relative stability and resource wealth.

In a region marred by ongoing conflict, few nations in the Middle East have the financial and political capacity to prioritize expanding the frontiers of science, however, Saudi Arabia is tapping into its large stream of oil revenue to fund a research revival with the aim of becoming a regional science leader.

Over the past decade, the Saudi Arabian research environment has changed dramatically, not just in terms of greater funding, but in the way research is conducted. The Kingdom has built state-of-the-art research institutes, forged relationships with renowned foreign institutions and developed a visionary science strategy that extends into 2030.

This vision is now starting to bear fruit. Saudi Arabia had the fastest growth in weighted fractional count (WFC) output in the Middle East, surpassing all the region's other countries. Since 2012, its WFC has more than doubled, from 46 to 99 by 2015.

The oil-rich Kingdom is not facing very robust competition from its Arab states neighbours. In the United Arab Emirates (UAE) and Qatar, research is indeed growing and branches of well-established Western universities are setting up, but the UAE's position is a very distant second with a WFC of 12.

Though Egypt has been the regional leader in scientific research, its recent political turmoil has hampered growth in science. The region's former stronghold has experienced a decline in WFC and slipped behind the UAE to third in the Arab world with a WFC of 9 in 2015.

Even new high-calibre institutions like Zewail City of Science and Technology, and established powerhouses like Cairo University have not been able to keep up with the plethora of research opportunities, grants and partnerships in Saudi Arabia.

Elsewhere in the Arab world, conflict thwarted opportunities for countries to sponsor scientific endeavours, with many losing the infrastructure, funding and expertise required to build research enterprises or provide an adequate level of basic education.

In Saudi Arabia, by contrast, according to the British Foreign and Commonwealth Office's research and analysis department, education was allocated 25% of total budget expenditure in 2015, the equivalent of more than US$54 billion, which included the construction of three new universities in Jeddah, Bisha, and Hafr Al-Baten, major refurbishment of existing universities and upgrading of hundreds of new schools.

Beyond its immediate neighbours, Saudi Arabia has more serious regional competition — mainly in Turkey and Iran — but the country is forging ahead in several fields.

In 2015, Saudi Arabia has again overtaken the two countries, making it the leader of the three in terms of WFC output in the index. With a WFC around 45% bigger than either Iran's or Turkey's, Saudi Arabia is also the most prolific among the three in the total number of papers published in journals in the index, having contributed to 479 articles in 2015.

Saudi Arabia is comfortably ahead in terms of growth, with an 87% increase in WFC from 2012 to 2015, thereby steadily rising faster than Iran, which has seen a 4% decline, and Turkey, which grew by 8%, over the same period. This rise may be an indication of the country already beginning to reap the reward of its investment.

It therefore comes as no surprise that Saudi Arabia's institutions are the front-runners amongst regional competitors. King Abdullah University of Science and Technology (KAUST) and King Abdulaziz University (KAU) are leading the top-10 institutions in the three countries, the rest of which are made up of three universities from Turkey and five institutions from Iran. No other institutes in any Arab state make the list.

The specific areas of research pursued by the Kingdom are part of the country's National Science, Technology and Innovation Plan (NSTIP), formulated in 2008, and set to instruct the country's research until 2030.

Since then, R&D in Saudi Arabia has grown sharply, according to Mansour Al-Ghamdi, director of the general directorate of scientific awareness and publishing at King Abdulaziz City of Science and Technology (KACST). He expects this trend to continue steadily over coming years. The first stage of the plan aims to position Saudi Arabia as a regional leader, and the Kingdom has taken strides over the past four years towards that ambition, according to the index rankings.

“We've set goals over 25 years to make a regional and international impact in research, but instead of funding everything, we've specified 13 priority areas,” says Nasser Al-Aqeeli, dean of research at King Fahd University of Petroleum & Minerals (KFUPM).

These priority areas span several technological fields, explains Al-Aqeeli, and the plan is to pour the bulk of the huge funding reserves Saudi Arabia is allocating to research into these priority disciplines to help make a difference. Saudi Arabia's enormous oil industry clearly drives the country's science focus. The country's science output in chemistry is highest and, between 2012 and 2015, Saudi Arabia's chemistry WFC experienced a 190% growth, the largest increase for any country in the Middle East in any subject area tracked by the Nature Index. Its 2015 WFC of 67 in chemistry places it well ahead of Turkey, Iran, Egypt and other Arab neighbours.

“Publishing in chemistry is easier than in other fields,” says Al-Aqeeli. “It's grabbing the attention of the industry here, so by default funding it is easier.” Materials science is also receiving increased funding, he adds.

Research in physical sciences in Saudi Arabia is second only to chemistry. Its output has been fluctuating, however, with its WFC hovering around 30. In 2015, Saudi Arabia's WFC of 32 has been outranked by Turkey, with a WFC of 34, and Iran, with a WFC of 53.

Research output in the life sciences also grew rapidly over the past four years, doubling from 2012 to a WFC of 8.5 in 2015. However, compared to its 102 papers published in this discipline, this is the smallest relative author contribution of all the four subject areas, with only 8% per paper — a trend seen in other countries in the region.

Earth and environmental sciences, which has a low uptake by institutions in the region, has also seen a recent growth spurt. After three years of fluctuation, Saudi researchers have increased the country's output in the field by 153% in 2015 compared to 2012, giving Saudi Arabia a slight edge over Turkey.

At KAUST Earth science is still a nascent field, according to J. Carlos Santamarina, professor of Earth science and engineering at the university, but it is growing.

Researchers at KAUST are exploring a variety of topics including deep Red Sea currents and rifts, volcanology and seismic activity, and dust and atmospheric science.

“Clearly, these are all critical areas in Saudi Arabia,” he says. “And, knowledge generated in these areas is relevant worldwide.”

The research priorities of the Kingdom are shaped by its needs and its attempts to best exploit its natural resources, while keeping an eye on emerging alternative energy sources. The next phase of the NSTIP is also focused on linking research to industry.

“We've been doing good work in terms of executing research but it was very difficult to translate patents and discoveries to economical values. Many patents failed to materialize,” says Al-Aqeeli. This difficulty is why the Kingdom continues to focus on specific research areas seen as being the most likely to be translated into ventures. It explains the focus on chemistry and applied physical sciences, and a lack of enthusiasm for other areas such as life sciences.

Instead of throwing money at all types of research and seeing what sticks, Saudi Arabia is opting for a process of thoughtful selection. “We're trying to redefine excellence when it comes to research,” says Al-Aqeeli.