Funding cuts and fear of retribution are hampering scientists’ response to the Amazonian deforestation crisis. 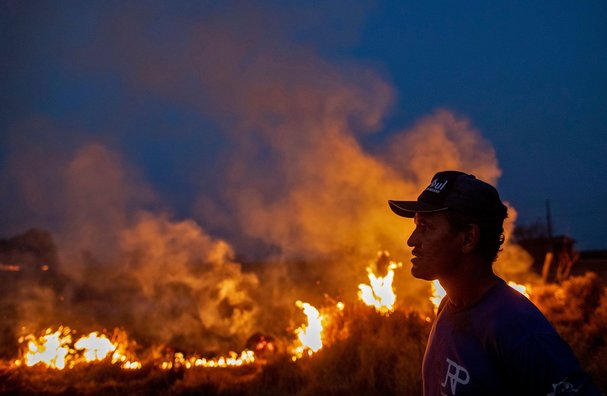 A labourer watches a fire that spread to the farm he works at in Mato Grosso State, Brazil, on 23 August.

Brazilian researchers investigating the cause and extent of wildfires in the Amazon are so afraid for their jobs that they have published their findings in a leading journal anonymously.

A new paper on the reasons behind Brazil’s August fire crisis contradicts the official narrative from the Brazilian government that the fires fell within the historical average.

The report states that the fires were related to the sharp increase in deforestation that coincided with President Jair Bolsonaro’s time in office. Several authors have withheld their names for fear of retribution.

“We regret this was necessary,” the team, led by Jos Barlow, a conservation scientist from Lancaster University in the UK and the Federal University of Lavras in Brazil, wrote in the acknowledgements of the paper, published in Global Change Biology on November 15.

One of the named authors, Erika Berenguer, says local researchers were so shaken by the unexpected sacking of Ricardo Galvão, director of Brazil's National Institute for Space Research (INPE), that some are now afraid to publically report their findings.

Galvão was dismissed in August after President Bolsonaro questioned the INPE satellite data that first hinted at a sharp uptick in deforestation and multiple fires.

“That a scientist was fired for doing his job, it sets a precedent that we've never had before,” says Berenguer, an ecologist at both the University of Oxford and Lancaster University in the UK.

“It creates a landscape of fear, because people don’t know what might happen when they publish their data. They are concerned about their future and if they could suffer some sort of governmental retaliation.”

After their paper was written, Berenguer says that four of the authors took the time to reflect on what the impact could be on their careers, and opted to withdraw their names.

“I am in Brazil at the moment doing fieldwork and I am hearing that people are afraid,” says Berenguer.

“They are afraid of two things – all the cuts that grants have suffered in Brazil, so research has been very limited, and they are also afraid of their data. If you work with ecology and conservation, and deforestation is increasing, then our work is going to show a worse picture, and they know that, and people are definitely afraid.”

Amazon deforestation has hit an 11-year high, with satellite data published on November 18 revealing a 30% increase over last year’s figures. In the year up to August 2019, nearly 10,000 square kilometres, an area roughly the size of Lebanon, was cleared – the great majority of it in the seven months since President Bolsonaro took office.

Camila Ribas, a biologist at the National Institute of Amazonian Research in Manaus, Brazil, says the government’s efforts to undermine scientific institutions through a withdrawal of funds and cuts to high-profile staff represent an ideological attack on scientists who might speak out about the consequences of the deforestation.

“It’s a general project of weakening the research community that is critical of the government,” she says. “It’s bad, because we never know what comes next. Things that we previously thought were impossible can happen, such a firing the director of INPE because he said something that was true.”

In a speech to the United Nations in September, Bolsonaro denied that the Amazon was being devastated by fire, and blamed the media for hyping the 2019 fires.

In some institutes investigating deforestation, including INPE, the government has “changed all the administration” to staff of their choosing, says Francisco W. Cruz, a palaeoclimatologist at the University of São Paulo, who is among the five most prolific Brazilian researchers publishing in Earth and environmental sciences in the Nature Index journals from 2015 to 2018.

In August, the same month that Galvão was fired, the government moved to take greater control of the Amazon Fund, a partnership between Germany, Norway, and Brazil.

The fund has provided US$1.3 billion to reforestation projects over the past decade, but in response to Brazil’s move to change its governance structure, the European partners decided to withhold their funding, leaving local conservation NGOs scrambling to find support elsewhere.

“This pressure that the government is applying could impact [our] freedom to do this kind of research on deforestation and fire measurements,” says Cruz.

It’s a strategy of occupation on the part of Bolsonaro’s government, which had an election campaign pledge of opening up protected areas to exploitation, says Paulo Artaxo, who studies Amazon ecosystem change at the University of São Paulo, and also appears among the top five Earth and environmental sciences researchers for Brazil in the Nature Index.

“The message from the government is, ‘Do whatever you want in the Amazon, invade what land you want, and we will not come after you,’” he says.

Deep funding cuts this year saw the country’s Ministry of Science, Technology, Innovation and Communication’s budget slashed by 42%. Cuts have also been made to budgets of the Ministry of Education, which funds universities, and the Ministry of Environment.

Cuts to Brazil’s major research funding agency, the National Council for Scientific and Technological Development, have been “very, very severe,” says Artaxo. “About 90,000 PhDs students were obliged to stop their research projects” at least initially, he says.

The funding cuts will significantly affect research in the Amazon, where fieldwork is costly, as researchers must travel to remote sites. “The effects are huge all over Brazil,” says Artaxo. “The cuts have affected me and all researchers working in Amazonia.”

Berenguer is Brazilian, and says that, while being based primarily in the UK gives her some feeling of security, “that doesn’t mean that we feel completely safe or might not suffer any retaliation, for example in grant proposals."

“We just don’t know, and that’s the worst part of it, when you don’t fully trust that institutions are working as they normally would," she says.

A global eye on the fires

The media attention and global outcry earlier this year did have some positive effects. Under pressure from public opinion at home, Bolsonaro eventually brought in the military to help counter the blazes.

Donations and statements of support poured in from celebrities, such as US$5 million pledged by actor Leonardo DiCaprio. The G7 group of nations offered $20 million to help fight the fires, but was turned down by Bolsonaro, who accused them of imperialism and interfering in Brazil’s sovereign affairs.

Earth Alliance, an NGO set up by DiCaprio, says it is “distributing funds to indigenous communities and local partners combating the fires, protecting indigenous lands, and providing relief to the communities impacted.” Last week. Bolsonaro accused DiCaprio and other NGOs of being part of an international campaign against Brazil.

The international outcry over the August fires also encouraged more overseas funding for research. “We cannot deal with the federal government right now, so one way to continue research on the Amazon is to have support from state governments and funding agencies, or international agencies,” says Ribas, who is supported by the US National Science Foundation and development agency, USAID.

A European consortium of 26 nations offered €26 million (US$28 million) in research funding for biodiversity and conservation projects in nations such as Brazil in a call published by the Biodiversa program in September. Such projects usually need federal government support, but in this case Brazilian researchers were able to apply through the funding bodies of 17 of Brazil’s states instead.

Nevertheless, the scientists agree there will be dark days ahead.

Artaxo predicts the Bolsonaro government will continue with its policy of allowing anybody to attack Amazonia’s public lands, “unless international pressure goes up, making it bad business for Brazil to allow this destruction.”

Ribas says she fears some birds in south-eastern Amazon regions most affected by fires will have little habitat left.

“From our years of work documenting distribution and genetic diversity of birds, we know that the concentrated deforestation in southern Pará and Mato Groso states is probably going to kill off some unique lineages,” she says.

“In Amazonia, we need to understand the forest, because we still don’t. It’s very different from North America or Europe, where you have a good idea of how diversity is organized. Here we have much to discover, including how the forest reacts to the fires.”

It will be difficult to reverse the existing damage, says Artaxo.

“For primary forest that is changed into pastoral land or soybean plantations, there is no way back, the changes are permanent to the Amazonian ecosystem,” he says. “This is very bad, not just for Brazil, but for the global climate change issue.”