Stronger hurricanes and controversial research on autism feature in these widely discussed studies. 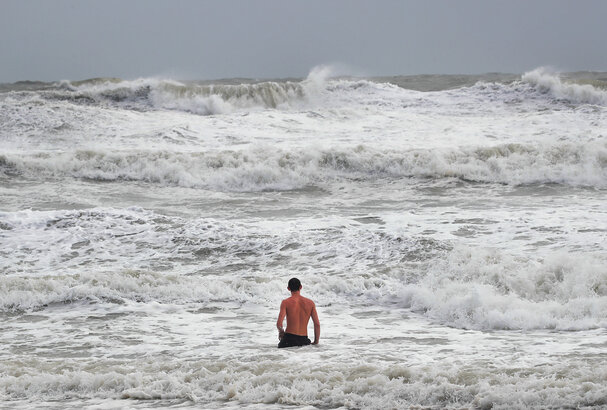 A swimmer in Florida during high tide as Hurricane Dorian churned offshore in 2019. A Nature study has found that, as the climate warms, hurricane landfall events on the United States East Coast could become more frequent.

November’s most talked-about natural-sciences papers included three on COVID-19, and one investigating the little-studied effect of a warming climate on hurricanes.

Also included in this list is a study on moral decision-making by people with autism, which drew a lot of attention on social media due to its language choice.

Here is an Altmetric ranking of November 2020’s most popular papers in the natural sciences, published in the 82 high-quality journals tracked by the Nature Index.

1. “No evidence for increased transmissibility from recurrent mutations in SARS-CoV-2”

Led by Lucy van Dorp from the UCL Genetics Institute in London, this study aimed to address speculation that SARS-CoV-2 (the virus that causes COVID-19) may be evolving towards higher transmissibility –mutations that spread more easily between people.

The researchers, from the UK and France, analysed 12,706 mutations identified within a dataset of almost 50,000 SARS-CoV-2 genomes isolated from patients in 99 countries. They concluded that none of the mutations, which occur as a natural part of viral evolution, had higher transmissibility.

“Most viral mutations are expected to have no impact,” van Dorp wrote for the Conversation in December.

However, van Dorp writes that a new variant detected in the UK, known as VUI–202012/01, which emerged after the paper’s publication, might offer the virus a new advantage.

“[I]t seems that this variant is now starting to dominate over existing versions of the virus and that it may be responsible for an increasing proportion of cases in parts of the country, particularly in regions where we also have rapidly expanding case numbers,” she wrote.

The study led by van Dorp and colleagues was covered by almost 200 online news outlets. It featured in more than 5,000 tweets, and reached an estimated audience on the platform of more than 10 million.

2. “Preexisting and de novo humoral immunity to SARS-CoV-2 in humans”

Certain antibodies that are produced by the immune system in response to the common cold could offer some protection against SARS-CoV-2, according to the conclusions of this journal article.

The common cold and COVID-19 are both the result of an infection by a human coronavirus. This study, led by Kevin W. Ng from the Francis Crick Institute in London, found evidence that some people, particularly children and adolescents, have SARS-CoV-2-reactive antibodies in their blood, without having ever been infected with the virus.

This appears to be the result of ‘immunological memory’ following exposure to common cold coronaviruses, and could explain why young people are less likely to become severely ill with COVID-19, the researchers suggest.

George Kassiotis, senior author of the paper and group leader of the Retroviral Immunology Laboratory at the Francis Crick Institute, emphasized that the research is still in very early stages and there are many aspects that need further investigation.

"For example, exactly how is immunity to one coronavirus modified by exposure to another? Or why does this activity decline with age? It is not the case that people who have recently had a cold should think they are immune to COVID-19,” he said.

The paper has been covered by 237 online news outlets so far, and has reached an audience of 9 million on Twitter.

This study is unusual in that its high Altmetric attention score is almost entirely due to the response on Twitter, where more than 3 million people saw references to the paper across several thousand tweets.

In contrast to the other studies on this list, Altmetric has yet to record coverage from online news outlets.

Lead-authored by Yang Hu from the Laboratory of Applied Brain and Cognitive Sciences at the Shanghai International Studies University in China, the study aimed to investigate how people with autism spectrum disorder (ASD) might approach moral decision-making compared to people without ASD.

The paper’s conclusion is that the function of the right temporoparietal junction (rTPJ) – a part of the brain that is involved in moderating attention and information processing – is responsible for differences in moral decision-making between people with and without ASD, causing people with ASD to be more rigid in their ethical stances.

The paper proved controversial, particularly among readers with autism, or who have family members with autism. In a letter published alongside the paper, Megan A. Ainslow from the Albuquerque/Bernalillo County Public Library, who identifies as an autistic adult, highlighted problematic language, such as referring to controls without ASD as “healthy”.

Co-author Jean-Claude Dreher from the Institute for Cognitive Sciences in France told Nature Index that the print version of the paper addresses concerns regarding language use.

4. “Slower decay of landfalling hurricanes in a warming world”

Authored by Lin Li and Pinaki Chakraborty from the Fluid Mechanics Unit at the Okinawa Institute of Science and Technology Graduate University in Japan, this paper investigates the effects of climate change on hurricane decay – the rate at which a hurricane dissipates once it reaches land.

Li and Pinaki analysed data for North Atlantic landfalling hurricanes (when the centre of the storm moves across coastal land) over the past 50 years. They found that hurricane decay has slowed, which means hurricanes stay stronger for longer.

The results also showed that this slowdown in decay is in direct proportion to a rise over the same period in sea surface temperature.

“[W]hereas in the late 1960s a typical hurricane lost about 75% of its intensity in the first day past landfall, now the corresponding decay is only about 50%,” the authors wrote.

Using computational simulations, Li and Pinaki showed how hurricanes that form in warmer waters carry more moisture as they hit land, which contributes to the slower decay.

The paper has been covered by 187 news outlets to date, and has reached an audience on Twitter of more than 3.5 million.

5. “Olfactory transmucosal SARS-CoV-2 invasion as a port of central nervous system entry in individuals with COVID-19”

More than one-third of individuals with COVID-19 have experienced symptoms related to the central nervous system, such as loss of smell and taste, headache, fatigue, nausea and vomiting. In severe cases, patients have experienced stroke.

But proof of SARS-CoV-2 infection in the brain and cerebrospinal fluid was lacking, according to this paper, lead-authored by Jenny Meinhardt from the Department of Neuropathology at the Charité – Berlin University of Medicine.

Meinhardt and her colleagues aimed to find the mechanism by which the SARS-CoV-2 virus might be infecting the central nervous system and the brain. They studied tissue samples from 33 patients who had died after contracting COVID-19 and found evidence of the virus in neuroanatomical structures that connect the eyes, mouth, and nose to the brain stem. The olfactory mucosa, located in the upper region of the nasal cavity, revealed the highest viral load.

"These data support the notion that SARS-CoV-2 is able to use the olfactory mucosa as a port of entry into the brain," says one of the team, Frank L. Heppner, a neuropathologist at the Charité – Berlin University of Medicine.

"Once inside the olfactory mucosa, the virus appears to use neuroanatomical connections, such as the olfactory nerve, in order to reach the brain. It is important to emphasize, however, that the COVID-19 patients involved in this study had what would be defined as severe disease, belonging to that small group of patients in whom the disease proves fatal. It is not necessarily possible, therefore, to transfer the results of our study to cases with mild or moderate disease."

The paper has been mentioned by more than 100 news outlets and has reached an audience on Twitter of almost 4 million.