Flesh and feathers trapped in amber were the talk of the internet in 2017. 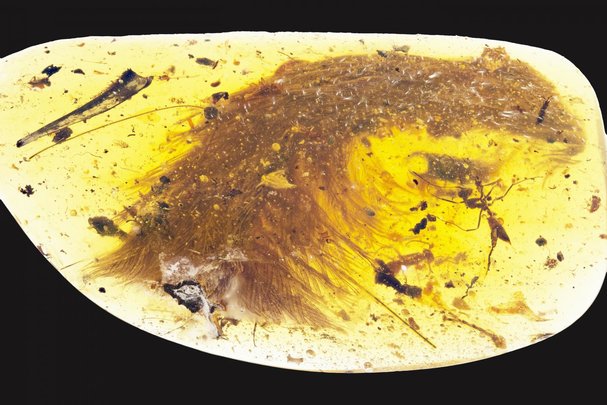 Browsing through an amber market in Myanmar, Lida Xing made an extraordinary discovery.

Xing, a palaeontologist at the China University of Geosciences, had chanced upon the feathered tail of a 99-million-year-old dinosaur preserved in a piece of amber. The fossilized resin provided a snapshot of how feathers evolved.

On closer inspection of the specimen, Xing and his colleagues were able to determine the dinosaur’s colour, skeletal structure and haemoglobin molecules.

Their research, published in Current Biology in December 2016, sparked a flurry of online chatter about fuzzy dinosaurs, evolution and Jurassic Park.

Scoring an impressive 3,978 on Altmetric, the paper was the third most talked about online in 2017 among the articles tracked by the Nature Index. It reached eighth place in Altmetric’s Top 100 Articles 2017 list.

The discovery attracted the attention of almost 300 news outlets, including National Geographic, The Huffington Post and The Sydney Morning Herald.

In The Guardian, Hanneke Meijer reported that the fossil provides palaeontologists with “a unique look at the structure and function of dinosaur feathers, a topic that has been hotly debated since the first evidence for fuzzy dinosaurs.”

Dinosaurs were shaggy?! Why not? https://t.co/WhI9UrcY9e

The Verge said: “Dinosaurs were just chickens enabled with the killing powers all chickens wish they possessed”. CNET pointed out that “evidence clearly and directly associating well-preserved feathers with dinosaur remains has been in scant supply. Now, for the first time, it exists.”

The paper was shared more than 2,000 times on Twitter with hashtags #JurassicPark and #dinosaur quickly becoming a trend.

tail of a #dinosaur found in amber. Look at images, read paper & play #JurassicPark theme in your head... https://t.co/1fwU20QLb1 pic.twitter.com/TRQqfWhkA9

Apparently frog DNA is not needed anymore for the Jurassic park we were promised in '94https://t.co/6b7KSMktKw pic.twitter.com/Sfp4KadEK7