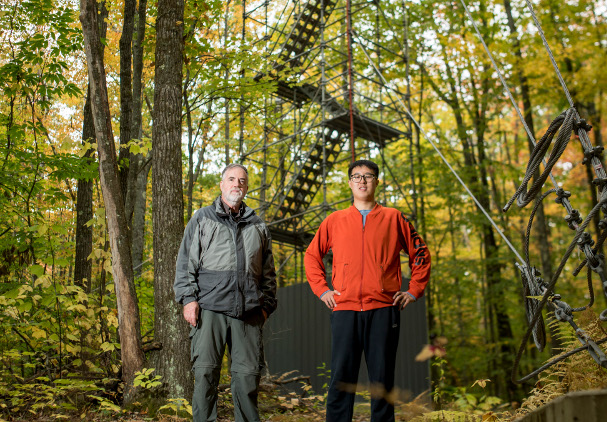 US researcher Bill Munger (left) and Jialin Liu (right), from China, are studying how forest ecosystems in the China and US respond to stress.

There’s an obvious reason for universities in China and the US to collaborate on climate change research. “The largest contributor to greenhouse gases is China, the second is the US,” says Michael McElroy, an atmospheric scientist at Harvard University in Cambridge, Massachusetts.

Addressing climate change, says McElroy, “is a very broadly based common challenge” for both countries. McElroy realized the need to work with partners in China to study the problem back in the early 1990s when he established the Harvard China Project, the first university-wide programme aimed at fostering partnerships focused on climate change.

The programme now includes around 25 researchers from both countries and involves partnerships between Harvard and leading Chinese institutions, including Tsinghua, Nanjing, and Peking universities. Index analysis shows that Harvard’s links with these universities represent some of the most productive collaborations between China and the US. Over the years, project researchers have published studies in numerous top-tier journals.

Partnerships between the world's largest producers of science publications, the US and China, are prolific. Analysis of 68 high-quality natural science journals included in the Nature Index shows Chinese and American researchers have collaborated in top journals more than other international pairings between 2012 and 2015.

One of the Harvard China Project’s new collaborative endeavors is to understand how forest ecosystems respond to stress by developing models based on observational sites in China and the US. “Forests are generally absorbing carbon from the atmosphere, but that would stop if they were damaged by climate change or pollution,” says the project leader from Harvard, Bill Munger.

In October, PhD student Jialin Liu, from Northeast Forestry University in China, started working with Munger, and another PhD student Archana Dayalu, at the observation site in the Harvard Forest, Massachusetts. The goal of his project is to share expertise that can help Liu analyze his data and get his work published.

Liu hopes his year-long stint in the US will open further opportunities and collaborations. “The academic atmosphere in the US is very open,” he says.