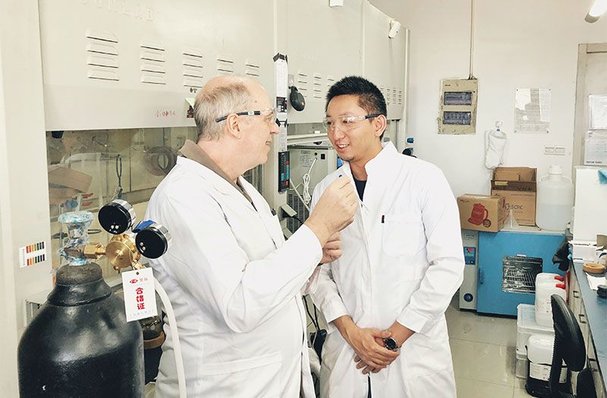 Zhang Liang (right) joined David Leigh's world-renowned laboratory in the United Kingdom after impressing the senior scientist with his initiative.

Three years ago, chemist David Leigh was ambushed by a smiling master’s student from Fudan University waving a CV and looking for a PhD position at Leigh’s lab in the United Kingdom.

Leigh, who leads a world-renowned lab at the University of Manchester, had just given a talk on molecular structures in Shanghai. But he was not familiar with Fudan. “I know now it’s one of the top universities in China, but I’ll admit I didn’t then,” he says.

The chemist, a fellow of the Royal Society, has become used to the huge enthusiasm exhibited by early-career Chinese scientists who attend his lectures in China. “There’ll be crowds at 8.30 a.m. and students gather afterwards for autographs.” The CV-brandishing Zhang Liang stood out. Keen to study overseas, he knew winning one of the 10 places available each year at Leigh’s prestigious lab was a long shot, so he pushed himself forward.

Happily, it worked out. Leigh, who recently made the world’s first molecular robot constructed of atoms, hired Zhang. Two years later, the young Chinese scientist was working on his organic chemistry PhD in Manchester, while managing the creation of Leigh’s first nanotech lab in China at East China Normal University (ECNU) in Shanghai.

Over the past 20 years, China has become an influential force in nanoscience research, with particularly high publication rates in catalysis and nanomedicine. Yet despite the productivity and substantial funding, ground-breaking research with broad applications delivering substantial returns on investment has not followed. To deliver such results, researchers say the government needs to invest more in closing the gap between basic research and the industrialization of nanotechnologies. Compared with other big research countries, the percentage of papers with industry co-authors in China remains relatively low.

China’s rise in nanoscience is due to the country’s high levels of investment in the field and ambitious targets for research and development overall, such as making the country a world-leading scientific powerhouse by 2050.

In 1990, the government began investing in nanoscience via schemes such as the State Science and Technology Commission’s Climbing Up project on nanomaterials. In 1999, the Ministry of Science and Technology began a basic research project, Nanomaterial and Nanostructure, and by 2006 the field had become one of the four pillars of basic research that received targeted funding from central government. Last year, the Suzhou Institute of Nano-Tech and Nano-Bionics announced a US$200-million plan to build the world’s largest multifunctional nanoscience research facility for computer and robot technologies.

China’s nano-related output has grown from 820 papers in 1997 to more than 52,000 papers in 2016 in the Science Citation Index. Four of the top 10 institutions for high-quality nanotechnology output are in China, according to the index.

The most popular area of the country’s nanoscience papers is in catalysis research, according to the number of articles listed in Nature’s Nano database, a web platform that examines the quantity and impact of nano-related research papers published globally. Experts predict this area of nanoscience research will continue to flourish. A team of scientists led by Bao Xinhe at the Dalian Institute of Chemical Physics has developed a catalyst that enables the direct conversion of synthetic fuel gas to light olefins, the basic building blocks of plastics.

Chinese researchers have also contributed to nanomedicine applications, such as improved methods for treating cancer. Despite such developments, Dai Qing, who returned to China in 2012 to launch a nanophotonics laboratory at the National Center for Nanoscience and Technology, is among those who believe Chinese scientists should push for stronger returns on investment. “We need to find a stand-out application to demonstrate that it is beneficial to the country to spend this money, not just talk about the possibilities,” he says.

Dai says that the grants structure has changed to reflect a push for tangible outcomes. “If you want a flagship grant you definitely need to find an industry partner.” Examples of change include developing interdisciplinary teams within Chinese institutes, taking a stronger lead in international projects, and working more closely with industry partners. For example, in May 2018, a minimally invasive cancer therapy was trialled in Shanghai. The ‘nano gun’ is a device loaded with anti-cancer agents that is injected into tumours. It was developed by a Chinese team working with Algerian researchers, based in France. If trials are successful, it will be developed for application in China.

As a young scientist Zhang, whose drive impressed Leigh, broke with tradition by initiating a conversation with his former professor, Hai-Bo Yang, from ECNU’s Department of Chemistry about starting a lab, which is now open. “Historically, respected Chinese academics court international talent to create collaborations. I realised young starters could do it with the help of senior local professors,” Zhang says. “To succeed in academia you need to learn to make connections.”

In 2018, China established its first private research institute, Westlake University in Hangzhou. It is backed by some of the country’s wealthiest industrialists, including Ma Huateng (Pony), founder and CEO of Internet giant Tencent, and Wang Jianlin, founder and chairman of the Dalian Wanda Group.

Many agree that while China has a bright future, cultural factors can hinder its ability to compete. On Zhang’s new team are four postdocs, two from China, and two from the UK and Germany. All were invited to Manchester for training. During that period Zhang noticed how culture and language influence research styles. “Discoveries often come from conflict or argument. But Chinese people can be culturally averse to this,” he says. “Also, when you’re working in your second language, it can be hard to argue your point.”

Zhang believes the country will become a nanotech world leader. Certainly, Leigh believes that his days of being revered in China are numbered.