Breaking down the afterlife of biodegradable plastics 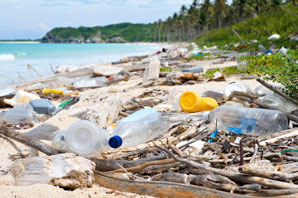 Biodegradable plastics that can be composted at home or used to generate biofuels are not a panacea for pollution.

Plastic packaging is used to protect and preserve consumer goods, but is a significant part of the global pollution problem. Half the litter strewn on Europe’s beaches is single-use plastic. It washes out to sea, where it can harm turtles, whales and birds that eat the drifting debris. The European Union aims to reduce plastic in landfills from 30% to 10% by 2030, so there is a strong push to reduce or reuse waste.

Biodegradable plastics, which break down into organic products, are often less strong and flexible than conventional plastics. Biodegradable plastic blends are being designed to more closely meet the needs of commercial packaging, but their outcome in different environments is unclear.

“People think that biodegradability gives us a licence to throw away,” says Kevin O’Connor of University College Dublin. “It doesn’t.”

O’Connor’s team, which included researchers from Trinity College Dublin, investigated how five biodegradable plastics, both in their pure form and in carefully crafted combinations that could be used in packaging, broke down in different environments. These included industrial and home composting, anaerobic digestion — a process that produces biofuels — as well as soil, seawater and freshwater samples from around Belgium. They measured biodegradation as the amount of organic carbon in the bioplastics that converted into carbon dioxide and methane.

“Surprisingly, we were able to design in biodegradability,” says O’Connor, “but it still depends on the environment in which the plastic ends up.”

Polylactic acid, a major bioplastic used in packaging, requires temperatures of 50 degrees Celsius to trigger biodegradation. But when the team blended in a small amount of a petrochemical called polycaprolactone, it decayed under home-composting conditions (around 28 degrees Celsius). This could reduce costs and emissions from waste collection and transport. And most of the bioplastics broke down by anaerobic digestion to produce biogas, which could contribute to renewable energy targets.

However, only two bioplastics — a bacterial polyester called polyhydroxybutyrate and the fully plant-based thermoplastic starch — degraded to required standards in all environments.

Because experimental temperatures were much higher than those found in nature, the researchers expect even slower degradation in soils, rivers and oceans. “The slow biodegradation observed in marine and fresh water shows that we should not allow any type of plastic to be released into these ecosystems,” says O’Connor.

“The solution to plastic pollution is a change in human behaviour,” says O’Connor. “If we start there, then we will manage plastic pollution better and these biodegradable plastics will offer us more options for managing plastic waste.”