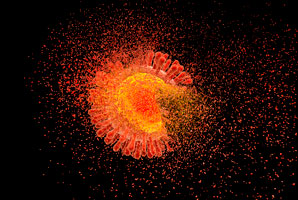 Women with large numbers of immune cells that express a gut ‘homing signal’ on their surfaces are more susceptible to HIV infection — and have worse outcomes after acquiring the virus — than women with fewer such cells.

That’s according to a study of women from South Africa and Kenya, plus experiments in monkeys exposed to a simian form of HIV. In all cases, pre-infection levels of CD4+ T-cells, or ‘helper’ T cells, expressing α4β7 integrin, the gut-homing surface protein, were strongly associated both with later risk of HIV acquisition and the chance of the immune system becoming ravaged post-infection.

The international research team, which included scientists from the University of Cape Town, explained these findings with lab experiments showing that α4β7-expressing T cells in the gut are especially susceptible to HIV.

People living with the virus might thus benefit from a drug that targets α4β7 integrin. Fortunately, one exists and is already used to treat severe cases of Crohn’s disease and colitis — meaning it could be repurposed to combat HIV infection.