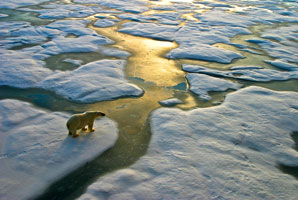 Arctic sea-ice isn’t just being melted by warm air above — it’s also being heated from below.

Warm, dense, salty currents from the Atlantic Ocean swirl around the Arctic under an insulating layer of colder, fresher water. But 15 years of temperature measurements from the Arctic’s eastern Eurasian Basin show the two layers are mixing, reported by an international team of climate scientists including researchers from Roshydromet, Russia.

Coupled with rising air temperatures, this so-called ‘Atlantification’ of Arctic waters accounts for the dramatic sea-ice losses seen in the area in the past decade. Prior to this study, Atlantification had only been seen in the western Eurasian Basin. The researchers predict the effect is likely to keep creeping eastwards.