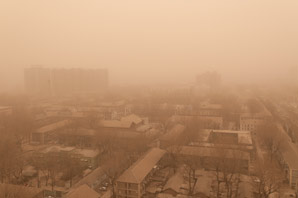 For 2,000 years, dust storms in China may have been driven by the rise and fall of its dynasties.

Monsoons have been instrumental in the success or failure of many Asian civilisations. Strong monsoon years meant agricultural abundance and rapid population rise, whereas weak ones led to food shortages, civil unrest, and the dawn of new dynasties. But whether the ecological effects of ongoing landscape changes outstripped those of natural variability remained unclear.

Now, by analysing sediments in a core taken from Lake Gonghai in northwest China, a team led by researchers from Lanzhou University has reconstructed past climate and dust storms for the last 2,000 years in the region.

The team found that dust storms were more common in periods of population growth that accompanied heavy rainy seasons since deforestation for agriculture increased desertification and soil erosion.

Sustainable land-use policies could reduce harmful dust storms by slowing the spread of drylands in China, the authors suggest.