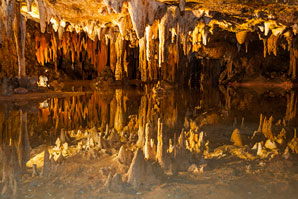 Stalagmites and stalactites can provide clues to past rainfall, but only in cool climates.

The oxygen isotope composition (δ18O) of cave drip water deposits reflects historical freshwater input, because rainwater is enriched with the oxygen isotope 16O. However, the local climate could affect how faithfully this δ18O record represents past precipitation.

A team that included researchers from the University of New South Wales in Australia compared δ18O data at 163 drip sites from caves around the world with δ18O values in local rainfall and groundwater — an important freshwater supply.

They found that in regions where the average temperature is below 10 degrees Celsius, dripwater δ18O closely reflected rainfall δ18O, whereas in warmer climates, where rainwater evaporates before soaking in, it was similar to groundwater δ18O.

Cave drip formations could serve as useful proxies for past droughts and floods in hot, arid regions where groundwater is replenished only by very heavy rain. This could help researchers to predict how global warming might affect freshwater supplies.