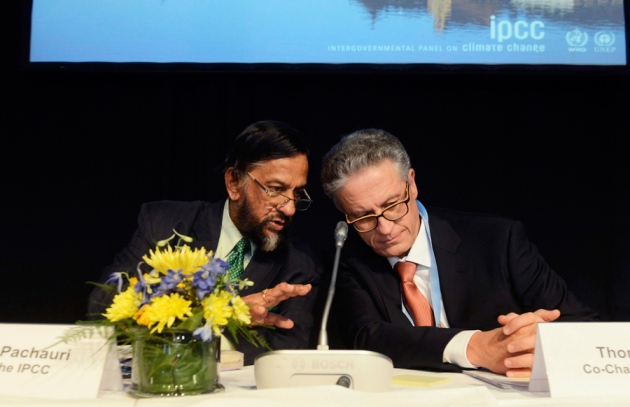 Every six years or so, the Intergovernmental Panel on Climate Change (IPCC) reports on everything that is known about global warming. In between, at meetings behind closed doors, hundreds of scientists review studies, discuss the latest model results and assess humanity’s options. The eventual result is a series of reports, such as the scientific analysis released last month — the first component in the fifth assessment on climate change, which will also cover adaptation and mitigation. But how, exactly, do these reports get written?

This week, at its latest plenary session in the Black Sea city of Batumi, Georgia, the IPCC will consider a request from social scientists who, armed with recorders, want to study the interactions that take place within the panel’s many meetings. The proposal, part of a larger “assessment of assessments” funded by the US National Science Foundation, could offer insight into the ways that social dynamics, unconscious biases and seemingly mundane rules affect the final product — and what might be done to improve the process.

“Most previous studies have looked at how the IPCC interacts with the outside world, but we’re interested in how it interacts with itself,” says Michael Oppenheimer, a climate scientist at Princeton University in New Jersey, who recognizes his own biases as a participant in the past four climate assessments. “The truth is that very little is known about the actual process.”

Sociologists of science have long been interested in the way that social dynamics subtly tug at the scientific process, and the IPCC, a prominent target because of its international stature and political significance, has been studied before. In a pair of recent papers (K. Brysse et al. Global Environ. Change 23, 327–337; 2013, and J. O’Reilly et al. Soc. Stud. Sci. 42, 709–731; 2012), which centred on the treatment of rising sea levels in the 2007 assessment, Oppen­heimer and his colleagues argued that the IPCC tends towards caution and errs “on the side of least drama”. Their results were based on IPCC documents and subsequent interviews, but the researchers did not have access to the meetings in which the issue was thrashed out.

“Most people on the outside have no idea what the IPCC does.”

In the studies, the researchers focused on the IPCC’s decision to exclude melting of the West Antarctic Ice Sheet from its review, because of uncertainty in the models used to predict the ice sheet’s behaviour. As a result, the final assessment projected a sea-level rise of up to 59 centimetres by 2100, even though new studies had suggested that an acceleration in ice-sheet melting could raise ocean levels substantially higher. Oppenheimer and his colleagues found that the exclusion decision was driven by a few key scientists and a requirement for consensus, and also by an assessment structure that split the treatment of sea ice into three chapters covering the past, present and future. This complicated the assessment process by involving more scientists and overemphasized uncertainty, the researchers argued.

The social scientists now want to go deeper and get inside the IPCC meetings as they happen. That would allow the team to observe scientists’ interactions and to interview pivotal actors on the spot, rather than trying to reconstruct events. Treating scientists as subjects, however, raises privacy issues, given that the deliberations are confidential, a policy that is intended to allow scientists to talk openly without fear of having off-the-cuff remarks broadcast to the world. The social scientists also recognize that the mere act of observation could affect the process, although they say that their protocols would be designed to minimize intrusion and maintain confidentiality.

Such fears led the IPCC to deny the team’s first request for access in 2010. It came at a particularly sensitive time, when the panel was reviewing its procedures after an embarrassing mistake (regarding Himalayan glaciers) in the previous assessment, and following the ‘Climategate’ controversy, sparked by the leak of thousands of private e-mails from the University of East Anglia, UK, revealing private discussions between leading climate scientists.

Procedure was also an issue: the request came after the IPCC had enlisted scientists and laid out the ground rules for the fifth assessment. “It was perceived by some as a change of the rules in the middle of the game,” says IPCC vice-chair Jean-Pascal van Ypersele, a climatologist at the Catholic University of Louvain in Louvain-la-Neuve, Belgium.

Van Ypersele suspects that the proposal will be received more warmly this time around by member governments, because it could be folded into the IPCC assessment process from the outset. This week, the IPCC is likely to either approve the proposal, or delay action until after the fifth assessment is completed next year, he says.

Naomi Oreskes, a science historian at Harvard University in Cambridge, Massachusetts, and a member of the prospective study team, argues that allowing ethnographers inside the process will promote transparency and enhance the panel’s credibility with the public and policy-makers. “Most people on the outside have no idea what the IPCC does,” she says, and the black box inevitably generates suspicion and fuels criticism among climate sceptics. Clarifying the process might make the IPCC’s assessments seem a little less like magic — and a little more like sausage-making.