More than 40% of tuberculosis infections that are resistant to front-line treatments are also resistant to some common backup drugs, according to research published this week in The Lancet1.

Efforts to control tuberculosis are being hampered by the emergence of multidrug-resistant (MDR) strains of the disease, which resist treatment with two front-line antibiotics, rifampicin and isoniazid. In some parts of the world, as many as 50% of tuberculosis cases are resistant to these drugs2. Alternative treatment options are toxic and expensive, relying on second-line drugs that are not as effective and must be given in lengthy courses. Unfortunately, the majority of MDR tuberculosis cases occur in developing countries that can’t afford the several billion dollars that the global Stop TB Partnership estimates3 will be required to combat the disease. 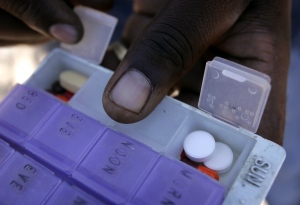 In countries such as South Africa, drugs commonly used to treat tuberculosis are becoming less effective as strains of the diseases develop resistance.

More recently, strains of tuberculosis have emerged that are resistant not only to front-line antibiotics, but also to one or more drugs within each of the two most important classes of second-line drugs — broad-spectrum antibiotics called fluoroquinolones, and injectable agents (amikacin, capreomycin and kanamycin). This extensively drug-resistant (XDR) tuberculosis heralds a disturbing trend towards infections that are virtually untreatable.

“It is critical that we take steps now in diagnosing, treating and preventing MDR tuberculosis so that it doesn’t turn into XDR tuberculosis,” says Peter Cegielski, medical officer for the division of tuberculosis elimination at the US Centers for Disease Control and Prevention in Atlanta, Georgia, and a co-author of the Lancet study1.

Cegielski and his colleagues investigated the prevalence of resistance to second-line drugs among 1,278 people diagnosed with MDR tuberculosis in eight countries — most of which are on the list of nations with a high MDR-tuberculosis burden. They found that 43.7% of the study participants were infected with a tuberculosis strain that was resistant to at least one second-line drug, and 6.7% of the infections proved to be XDR tuberculosis.

The team also identified factors associated with a risk of developing resistance to second-line drugs, and found that the most significant was previous treatment with the same drugs. “By identifying the risk factors, we can help shape practice to ensure that patients are diagnosed and treated properly,” says Cegielski.

Until now, there has been no clear understanding of acquired resistance to second-line drugs, because countries where MDR tuberculosis is rife have limited laboratory resources and lack consistent testing. Paul van Helden, a tuberculosis researcher at the University of Stellenbosch in South Africa, says that the Lancet study provides a baseline against which to measure future progress.

Sven Hoffner, a clinical mycobacteriologist at the Swedish Institute for Communicable Disease Control in Solna, says that drug-resistant tuberculosis is "a manmade problem", often because drugs are not available or of poor quality. The key to controlling it, he says, is to detect and treat cases quickly. However, diagnosis can take up to three months, during which the disease can still be transmitted.

"If you diagnose MDR tuberculosis, up front you need to do a check on resistance and should tailor treatment to the individual patient,” van Helden says. However, in the vast majority of countries with a high tuberculosis burden, this is too expensive and logisitically tricky. Last year, a report4 by the World Health Organization suggested that in 2010, only 16% of people with MDR tuberculosis received appropriate diagnosis and treatment.

There are reasons for hope, however. Some countries, such as Latvia and Estonia, have managed to stabilize or even reduce their levels of MDR tuberculosis by putting in place control measures. Cegielski says that faster diagnostic tools are being developed and implemented, although there is some way to go before they can be used to identify all drug-resistant strains. Two new tuberculosis drugs are in the final stages of development, and could also help to replace those being rendered less useful through resistance, he adds.