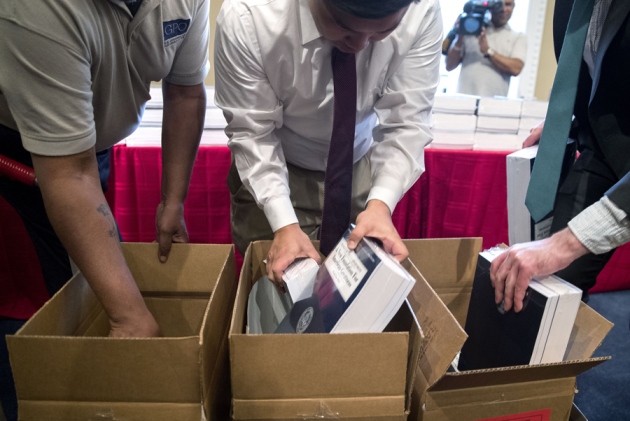 The White House budget plan could face a rocky reception in Congress.

US President Donald Trump released a revised budget plan on 23 May that would cut science programmes across the federal government in 2018. Biomedical, public-health and environmental research would all be pared back.

Those cuts, along with deep reductions in programmes for the poor, are balanced by a proposed 10% increase in military spending. This overall strategy echoes the “skinny budget” outline that Trump released in March, which faced opposition in Congress. Earlier this month, lawmakers approved a 2017 budget deal that increased funding for key science agencies and ignored the president's push for cuts.

“This budget is terrible, and we’re confident that Congress will ignore it,” says Jennifer Zeitzer, director of legislative relations at the Federation of American Societies for Experimental Biology in Bethesda, Maryland.

The National Institutes of Health (NIH) would face a cut of 18% in the Trump plan, from US$31.8 billion in 2017 to $26 billion in 2018. According to budget documents, this would be achieved by “structural changes” to reduce the amount of overhead (known as indirect costs) that the agency pays to grant recipients. Under the current system, individual research institutions negotiate with the government to set the rate at which they are reimbursed for expenses such as administration and the construction and maintenance of facilities. The White House wants one rate for all grantees to mitigate “the risk for fraud and abuse”.

The budget would eliminate the $70-million Fogarty International Center in Bethesda, which coordinates with other NIH institutes to train researchers and health-care providers overseas. The rest of the cuts would be spread relatively evenly across the NIH’s 26 remaining institutes and centres.

The White House plan would create the $272-million National Institute for Research on Safety and Quality, which would receive another $107 million from an established trust fund on patient-centered outcomes research. The institute would study the outcomes of treatments and health services, taking on the role of the independent Agency for Healthcare Research and Quality in Rockville, Maryland, which would be eliminated.

The Trump budget also includes $86 million for the NIH’s arm of the Brain Research through Advancing Innovative Neurotechnologies (BRAIN) Initiative. And it sets aside $100 million for the Precision Medicine Initiative: a 10-year effort to track the health of 1 million Americans that is scheduled to launch later this year.

Congressman Tom Cole (Republican, Oklahoma), who chairs the US House of Representatives spending subcommittee that funds the NIH, has said that he does not expect that Congress will support Trump’s proposed cuts. Other lawmakers from both major political parties have also come out against the president’s plan for the NIH.

One bright spot for public health is Trump’s proposal to establish an “emergency response fund” within the Department of Health and Human Services, which includes the Centers for Disease Control and Prevention (CDC) in Atlanta, Georgia. This would give the department the authority to move up to 1% of its budget to respond to emerging health threats, such as the recent outbreaks of the Ebola and Zika viruses. Much of this work would probably involve the CDC.

Public-health officials have called for such a fund for years. But Georges Benjamin, executive director of the American Public Health Association in Washington DC, says that Trump’s proposal is “a shell game”. The White House wants to slash more than $1.2 billion from the CDC’s budget, with the largest cuts coming from public-health preparedness programmes.

“They dramatically cut the actual operating funds and then create the capacity to go into your pocket, which has much less money in it,” Benjamin says. “It’s smoke and mirrors.”

The Trump plan would cut government funding for the US Food and Drug Administration by 31% from the 2017 level, to $1.9 billion. That $845-million decrease would be offset by a $1.3-billion increase in the “user fees” that companies pay the agency to review their products. The law that sets the agency's user-fee rate expires in September, and Congress is working on reauthorizing it. Draft legislation released jointly by the House and Senate in April would raise user fees by only $400 million per year.

Biology would see the smallest reduction — 7.1%, to $672 million. The Office of Integrative Activities, which supports interdisciplinary research, would see the largest cut among the agency’s main accounts. Its budget would drop by 26%, to $316 million.

The agency’s Ocean Observatories Initiative, a collection of instrumented seafloor arrays, would be cut by almost 44%, to $31 million. The programme began full operations in June 2016, when real-time data began flowing in after nearly a decade of construction and development.

Within that directorate, funding for Earth science would drop by 8.7%, from $1.92 billion to $1.75 billion. The budget would eliminate five Earth-observing missions, for reasons such as redundancy with other measurements and steep technological challenges. Four of these programmes were targeted for cuts in the March 'skinny budget':

Trump's latest budget would also eliminate support for an instrument intended to measure reflected sunlight and Earth's thermal radiation. The instrument is meant to fly on future weather satellites.

Congress has already rejected Trump's plan to eliminate the PACE mission. Lawmakers set aside $90 million for the programme in the 2017 funding law enacted earlier this month.

The White House proposal would increase support for planetary sciences by 4.5% compared to the 2017 level, to $1.93 billion. Notably, Trump included a $425-million request for a mission to fly past Jupiter’s moon Europa, a perennial darling of Congress. There is no mention of a follow-on lander mission, which some lawmakers have also argued for. The proposed budget also continues funding for ongoing missions such as the Mars 2020 rover, but no additional money to begin developing a follow-on Mars orbiter to replace ageing ones that are currently in orbit.

“I’m disappointed to see that,” says Casey Dreier, director of space policy for the Planetary Society in Pasadena, California. “We’re underinvesting in the infrastructure at Mars.”

Funding for NASA’s astrophysics division would increase by 2.3% from the 2017 level, keeping the James Webb Space Telescope on track for an October 2018 launch. Heliophysics funding would remain flat as the Solar Probe Plus spacecraft, which is designed to swoop by the Sun, moves towards a launch next year.

Robert Lightfoot, NASA’s acting administrator, noted that the proposed science budget would support 60 operating missions and 40 that are under development. “This budget still includes significant Earth-science efforts, including 18 Earth-observing missions in space as well as airborne missions,” he said in a statement.

Elsewhere, NASA would continue to work on its heavy-lift rocket and crew capsule to take astronauts beyond low Earth orbit. Its education office would be eliminated entirely, however.

The US Department of Energy would receive $28 billion under the president's plan, a 5.3% reduction from 2016. The department's research programmes would take a much larger hit, however, particularly those focused on clean-energy technologies.

The Office of Science would see its budget cut by 16%, from $5.3 billion in 2017 to just under $4.5 billion in 2018. The biggest decreases by sheer dollar amount would come from basic energy sciences and biological and environmental research, but nearly all research programmes would feel the pinch. The lone exception is advanced scientific computing, which would receive a 16% boost to $722 million.

Funding for advanced energy technologies would drop by nearly $2.2 billion, or 53%. That includes a proposed $1.4 billion cut to the Office of Energy Efficiency and Renewable Energy. The Advanced Research Projects Agency — Energy (ARPA-E), which was designed to pursue riskier projects that could lead to major breakthroughs, would see its budget drop by 93% compared to 2016, from more than $291 million to just $20 million.

The biggest winner at the Department of Energy would be the National Nuclear Security Administration (NNSA), whose duties include overseeing the department's nuclear-weapons programme. The NNSA would see its budget increase by 11% compared to 2016, from $12.5 billion to $13.9 billion. Nearly $1.4 billion of that boost would go to the weapons programme, while nonproliferation efforts would be cut by nearly 8%, to $1.8 billion.

The White House proposal would make good on promises to shrink and reorganize the US Environmental Protection Agency (EPA), which would see its budget cut by more than 30% to $5.7 billion. Trump would slash spending on pollution-control programmes and research and development, eliminating about 23% of the agency’s roughly 15,000 staff members along the way.

The budget would overhaul the EPA’s regulatory agenda. It would eliminate funding to implement the agency's strategy to curb greenhouse-gas emissions from power plants — which is known as the Clean Power Plan — and dozens of other pollution-control programmes.

The EPA’s Office of Research and Development, which conducts the bulk of the agency’s research, would receive around $277 million, a reduction of 43% compared to 2017. That figure includes a cut of more than $50 million to the Air, Climate and Energy programme, which would be rebranded as the Air and Energy programme. Overall, the Office of Research and Development would lose 624 full-time positions, which is nearly 35% of its current staff.

The budget would eliminate support for the Great Lakes and Chesapeake Bay restoration initiatives, and reduce programmes to help states and Native American tribes tackle pollution by cutting more than 23%, to $2.7 billion. Such programmes have been popular among lawmakers in Congress.

A senior EPA official said that the proposed budget, if implemented, would lead to significant lay-offs and challenge the agency's ability to attract and maintain high-quality scientists. The official noted that Congress rejected major cuts to the agency in the 2017 funding deal approved earlier this month, however, and said that employees remain hopeful. "People are hanging in there, with the belief that Congress will come through in the end," the official said.

The US Geological Survey would be cut by 13% from the 2017 level, to $922 million. That would include eliminating the entire $8.2-million federal contribution to the fledgling earthquake early-warning system on the US west coast, which gives seconds of warning about incoming ground-shaking to hospitals, transportation networks and other public services. It is a “small, very cost-effective public safety project”, says John Vidale, a seismologist at the University of Washington in Seattle who works on the system. He says that he felt “surprise and dismay” at its proposed termination.

Other programmes would be tightened across the board. Wildlife research would drop by 22% from 2017 operating levels, to $35.5 million, while the project to study and mitigate volcanic hazards would be cut by 14%, to $22.4 million. Environmental-health programmes would drop by 20%, to $17.1 million; among the cuts would be $3.5 million to study the health impacts of pollutants in the Chesapeake Bay, Great Lakes and other regions.

Mineral and energy resources would get a 2% increase, to $74.4 million.

The National Oceanic and Atmospheric Administration (NOAA) would receive nearly $4.8 billion, a decrease of about 17%, or $987 million, compared to 2017. The majority of the cuts would come from the agency's research activities and satellites.

The budget for the satellite programme would fall by $530 million to $1.8 billion compared to 2017. The proposal would cut funding for the Joint Polar Satellite System (JPSS) — a series of polar-orbiting probes that will collect weather and other environmental data — by $221 million. That includes a cut of 51%, or $189 million, for the fourth and fifth satellites in the series.

The agency's Office of Oceanic and Atmospheric Research would be cut by $131 million, to $350 million. The White House proposal would also reduce the climate-research budget by more than 19%, to $128 million, while research focused on oceans, coasts and the Great Lakes would be cut by nearly 48%, to $99 million.