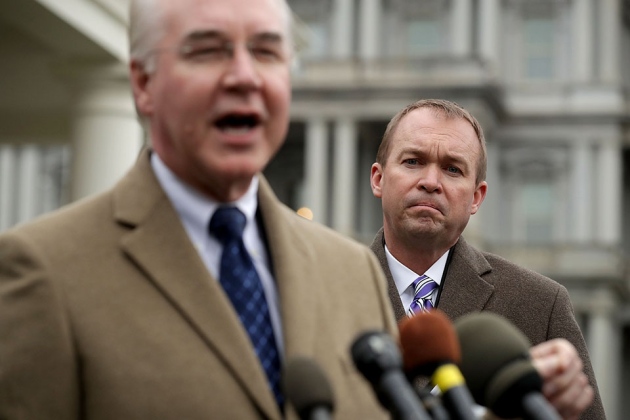 Mick Mulvaney (right), director of the Office of Budget and Management, with US Health and Human Services Secretary Tom Price.

Conventional political wisdom says that it’s best to be seen to be protecting common goods such as medicine and health. So US President Donald Trump is certainly shaking things up. Most scientists probably feel a little more than shaken up, given the slash-and-burn approach that the president signalled towards research in his draft budget proposal this week. The headline reductions give the unfortunate impression of a fire sale of the US government’s knowledge base: 31% off the Environmental Protection Agency! 20% off the Department of Energy’s Office of Science! More big savings to come!

Of the signalled cuts, it’s the headline 18% reduction in the spending power of the National Institutes of Health (NIH) that is dominating the agenda. As this journal has pointed out before, the idea that funding — for biomedicine or any other pursuit — leads directly to discovery in a neat and proportionate linear fashion is simplistic, and one that researchers should reassess before they promote it too eagerly. But politics thrives on simple messages, and so the headline writers have had a field day: cancer and other diseases will claim more lives if this cut goes ahead.

Trump and his team would have expected this, of course. It’s Congress that makes the fiscal decisions, and even a Republican-dominated legislature will find it difficult to endorse such serious cuts — and severe damage — to the NIH, which has previously been a cross-bench cause. That’s a common play from any White House: hand Congress an unpopular budgetary proposal, watch it scramble to find the money to fix the problem — in this case, to restore as much NIH funding as possible — and then sit back while Congress, not the Executive Office, takes the flak for cuts it must then make to something else.

As we report this week, scientists are furious about the proposals, and anxious about what comes next. There is no sign yet, for example, of what Trump plans for the National Science Foundation. They are right to be concerned. Trump’s team calls its budget a blueprint, but it is closer to a demolition order. It’s a scheme to cast aside expertise, dismantle evidence-based approaches to real-world problems and, if followed through, would do untold damage to science and research in the United States. Climate change will become more difficult to monitor and tackle, greater amounts of damaging pollution will go unchecked and, yes, more people will probably die of cancer and other diseases.

Since the end of the Second World War, successive occupants of the White House have worried about the waning dominance of US influence on the world stage, and have invested in world-class science to try to stay ahead on many fronts — innovation and quality of life among them. President Trump seems willing to surrender US leadership without a fight.

What happens now? More budget details from the White House are due in May, and deliberations in Congress are supposed to be completed in time for a new arrangement to come into force in October. Much will depend on the relationship between the president and the Republican Party — and how astutely (or not) Trump’s team has judged the party’s response in Congress.

The pessimistic view is that Congress will restore some (but not all) of the NIH money and nod the rest of the cuts through. This would allow Republicans and Trump to both claim victory, but would still leave the agency facing a crippling funding reduction. Make no mistake: that would be a disaster for US science, for scientists everywhere — and for everyone who believes and hopes that research can help to make a better world.

An optimist might see it differently. Trump’s attack on the NIH could be a step too far from an administration that has lost touch with its political base. A backlash could force a retreat and increase resistance to other attacks on science. Certainly, the administration is already struggling to justify its hostility towards US health-care research. At a press briefing late last week, Mick Mulvaney, the director of the Office of Management and Budget, was asked to justify the cuts. He said: “If you took over this as a CEO, and you’d look at this on a spreadsheet and go, why do we have all of these facilities — why do we have seven when we can do the same job with three, won’t that save money? And the answer is, yes.”

Actually, it’s a bit more complicated than that. And conventional political wisdom would tell him so.