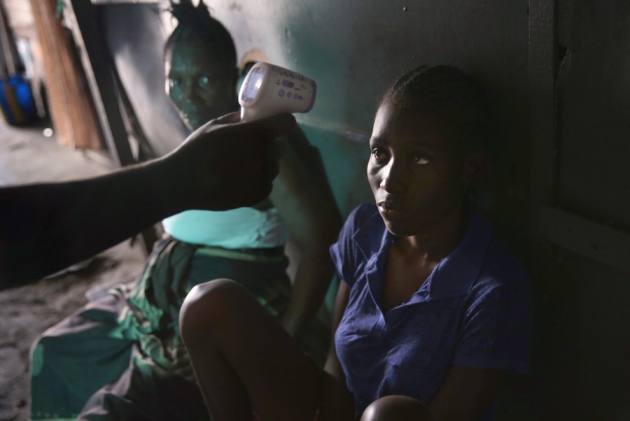 Testing for fever is one way to identify Ebola, but high temperatures can also be caused by a vaccine.

Safety trials of Ebola vaccines are starting to return results: at least one is known to be safe and to summon an immune response against the virus. The challenge now is to use the results to guide the larger studies that will reveal whether the vaccines work.

“The immune responses are there,” says infectious-disease researcher Adrian Hill, director of the Jenner Institute in Oxford, UK. “The tough call is whether they’re enough to protect humans against Ebola.”

Published on 26 November (J. E. Ledgerwood et al. N. Engl. J. Med. http://doi.org/xdr; 2014), the first vaccine results to be released since the epidemic began were reported by researchers at the US National Institute of Allergy and Infectious Diseases (NIAID) in Bethesda, Maryland. The vaccine was developed by the NIAID and the drug company GlaxoSmithKline (GSK), and is ‘bivalent’: it is made from a chimpanzee adenovirus that has been engineered to express proteins from two species of Ebola virus, known as Zaire and Sudan.

In phase 1 safety tests in September, 20 healthy volunteers in the United States received either a high or a low dose of the vaccine. Everyone mounted some kind of immune response against Ebola. But those who got the high dose produced more antibodies against a strain that is very similar to the virus driving the outbreak in West Africa; they also produced more immune cells known as CD8+ T cells.

Such safety studies are carried out in people who have a very low risk of becoming infected by Ebola so cannot reveal whether the vaccine protects against infection. But Anthony Fauci, director of the NIAID, notes that the immune responses of the people who received the high dose were in line with those of monkeys that were protected from Ebola after receiving the same vaccine.

Hill’s team started administering a monovalent version of the vaccine to 60 UK volunteers in September. Volunteers in the United States, Mali and Switzerland have also received that vaccine as part of safety trials (Ebola arrived in Mali only after the trials began). Researchers will scrutinize the results of the studies to identify the best vaccines and the appropriate doses, as well as side effects, and use those insights to guide efficacy trials to be carried out in affected countries next year. “Next month we’ll have information on all of the candidates,” Hill says.

One issue is how to interpret the effects of the vaccines. Conventional wisdom says that having high levels of antibodies is the best sign of immunity. But animal studies have hinted that CD8+ T cells could be more important. A vaccine that raises both would be ideal, but if either remains low, developers are likely to add a booster in efficacy trials (some safety trials are already testing this approach). Data from the ongoing trials in Mali will be especially important to working out the best dose, because vaccines often generate weaker immune responses in sub-Saharan African populations than in others. This is partly because of the presence of malaria, which can suppress the immune system.

Testing vaccinated monkeys often involves exposing them to much higher levels of Ebola than humans typically encounter, so scientists may be overestimating the immune reaction needed to prevent infection, says Daniel Bausch, a physician at Tulane University School of Public Health and Tropical Medicine in New Orleans, Louisiana.

There are also side effects to consider. Two of the ten people who got the high dose developed a brief fever. Some researchers worry that vaccines that cause symptoms that overlap with those of Ebola, such as fever, could sow confusion. But based on past studies of other adenovirus vaccines, Hill does not expect such side effects to be common and says that they will be manageable, if people who get the vaccine are warned that they may develop.

The GSK/NIAID vaccines are not the only candidates set to deliver data. A vaccine made from a virus that infects livestock is being tested in the United States and Gabon, and soon in Kenya. The vaccine was developed by the Public Health Agency of Canada and licensed to NewLink Genetics in Ames, Iowa, and to Merck in Whitehouse Station, New Jersey. Phase 1 trials are to begin early next year for a regimen involving an adenovirus-based vaccine developed by the US pharmaceutical company Johnson & Johnson and the NIAID, and a booster made from vaccinia (a virus similar to the one that causes cowpox) by Bavarian Nordic in Denmark.

“What you have is something close to a race,” says Hill, “and the best ones should go forward.”