The first major haul of research from the European Space Agency’s Rosetta mission, published in seven papers1–7 in Science on 22 January, reveals a rich and diverse landscape on 67P/Churyumov–Gerasimenko, the most studied comet in history. The best images — some of which had been presented first in December at a meeting of the American Geophysical Union — are pictured below. 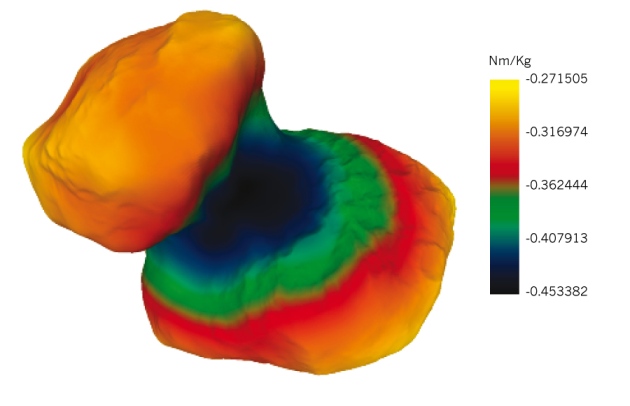 Using data from the Optical, Spectroscopic, and Infrared Remote Imaging System (OSIRIS) and the Radio Science Investigation instrument, the Rosetta mission team calculated the comet’s gravitational field1. The gravitational potential (pictured) also takes into account a pull caused by the comet’s rotation. The resulting force is greatest on top of the lobes, but it is about six times weaker in the neck region, where dust can lift off more easily. The team also used the data to calculate the comet’s density, finding that the body is relatively fluffy and porous — with a density of around half that of water, giving clues as to its structure and strength. 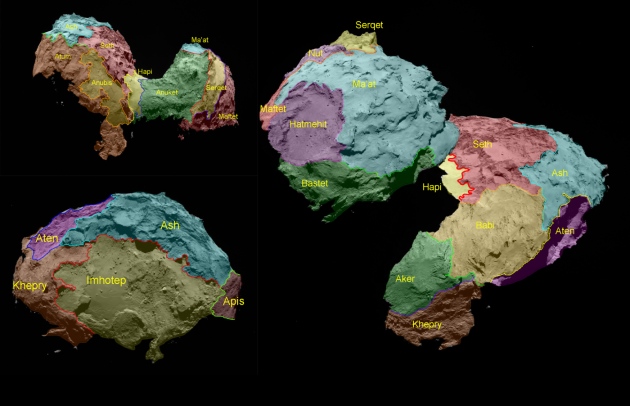 Images taken by the OSIRIS camera reveal vastly different kinds of terrain, including dunes, ripples and fractures2. Rosetta scientists have split the comet into regions defined by surface structure (see false-colour image), with each named after an Egyptian god. Hatmehit, for example, is a smooth depression on the 'head' of the duck-shaped comet that could be a dust-filled impact crater. Other areas, such as Seth and Hathor, are rough with steep cliff-like structures. However, the porosity of the comet means that rock-like structures are in fact compacted dust. Many structures look as though they are formed by gas moving dust around the surface, say the authors, in the same way that wind shapes sand in a desert.

Clues to the origins

Detailed pictures, at their best with a resolution of 15 centimetres per pixel, show structures that could hint at the comet’s history1. Three-metre-wide features nicknamed “goosebumps”, pictured here running down the inside of a pit in the Seth region, are found all over the comet. Holger Sierks of the Max Planck Institute for Solar System Research in Göttingen, Germany, who is principal investigator on the OSIRIS camera instrument, says that the pebble-like shapes could hint at the scale on which grains of dust and ice first clumped together in the early Solar System. “The hypothesis is these might be the building blocks of comets,” he says. 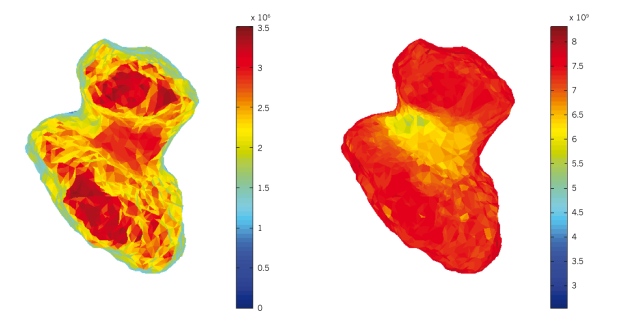 Data from several instruments show that the comet’s neck is the source of most of its streaming gas and dust. To understand why the region is so active, the Rosetta team looked at how much thermal energy hits the surface per 12.4-hour rotation (left) and per 6.5-year solar orbit (right). The neck receives less energy from the Sun than the rest of the comet because it is shaded, but they found that a suntrap effect from radiation bouncing between opposite cliff walls goes some way towards compensating for that. Other possible reasons for the region's high activity include its low gravitational pull, which means that little force is needed to blow dust away, and that the region might have a different composition than other regions, or have more ready access to water beneath the surface1. The team has still to answer whether the neck denotes a join between two comets or has been carved out of a single comet by erosion. Evidence of differences between the two lobes would indicate the former, but so far the two lobes seem to have very similar structures, says Sierks.

The material that sublimates into space to form the coma, measured by the Rosetta Orbiter Spectrometer for Ion and Neutral Analysis (ROSINA), shows different levels of water, carbon monoxide and carbon dioxide. This map shows how the ratio of carbon dioxide to water varied across the surface from 17 August to 22 September 2014. The composition also seems to vary over the 12.4-hour rotation period and with the season3. 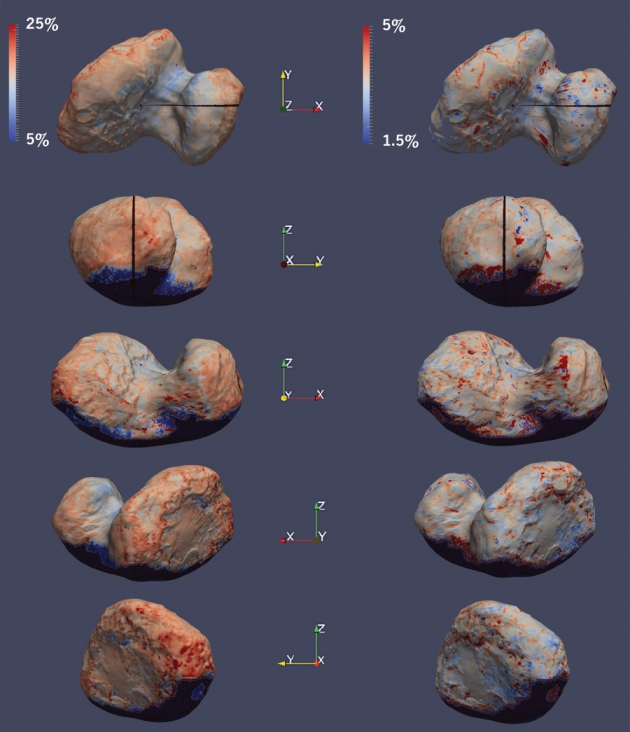 This visible and infrared portrait of 67P’s surface, obtained by the Visible and Infrared Thermal Imaging Spectrometer (VIRTIS), shows an abundance of opaque, organic compounds, but very little water ice. This would be consistent with an origin for the comet in the distant Kuiper belt — beyond the orbit of Neptune — rather than closer to Jupiter, as its current orbit would suggest4.