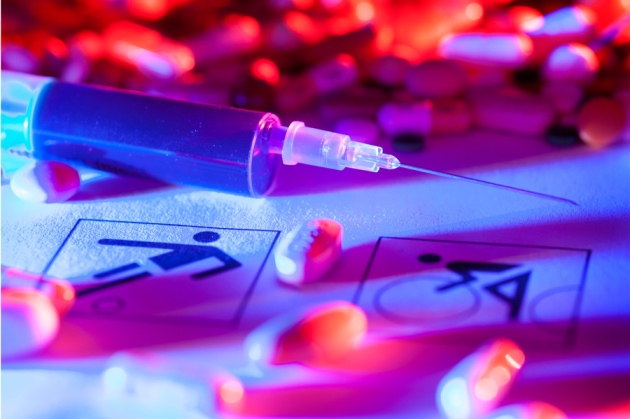 A class of compounds known as EPO, often used as a performance-enhancing drug by athletes, is unusually difficult to synthesize.

In a tour de force of biological chemistry, scientists have pieced together an entire protein hormone from scratch, and demonstrated that it works just as well in mice as the natural version. If verified, the complete synthesis of erythropoietin, a hormone that stimulates the production of red blood cells, would mark a new stage in the production and study of biological therapeutics.

No one is more pleased with the achievement — a decade in the making — than Samuel Danishefsky, a biological chemist at the Memorial Sloan-Kettering Cancer Center in New York, who led the team. “We think we’ve reached an important milestone,” he says. “I am very proud.”

But this is the second time that his group has published such a claim in just over a year, opening up a philosophical debate about where the finish line really is, and if Danishefsky has met the lofty goal that he — and the scientific community — have set for themselves.

“This is very important work,” says biological chemist Yasuhiro Kajihara of Osaka University in Japan. He warns, however, that the team’s analysis is ambiguous, and there is still much more progress to be made. “Is this molecule really correctly folded?” he asks.

Erythropoietin, also known as EPO, is naturally produced by the kidneys and became notorious as a performance-enhancing drug used by cyclists in the Tour de France. More conventionally, EPO is used to treat anaemia resulting from cancer, HIV/AIDS, and chronic kidney disease.

Unlike traditional, small-molecule drugs that can be precisely engineered in chemistry labs, biological therapeutics are proteins and similar biomolecules that are produced by plant, animal or bacterial cells, resulting in heterogeneous mixtures of closely related compounds. Drugmakers typically manufacture EPO in genetically modified cultures of Chinese hamster cells. As in human cells, these EPO molecules get 'decorated' variously with sugar chains, producing a cocktail of so-called glycoforms with different three-dimensional structures.

Chemists achieved early success by building simplified versions of EPO, which had biological activity but were not chemically the same as naturally occurring EPO. In the early 2000s, Danishefsky — who is best known for synthesizing Taxol (paclitaxel), a small-molecule cancer drug derived from the Pacific yew tree — set his sights on synthesizing EPO that would be identical to that in the body. But there were important differences between cracking EPO and cracking Taxol. “There is no such thing as EPO, if by that you mean a single entity,” Danishefsky says. “Therefore, when you undertake to do total synthesis, you are defining to some extent what that goal is.”

Nevertheless, in 2012, Danishefsky declared success, touting total chemical synthesis of EPO in Angewandte Chemie1. However, the work was criticized for attaching relatively small sugars to EPO’s protein scaffold and for the fact that the synthetic EPO had very low biological activity in cells. In hindsight, he admits, it may have been premature to declare victory.

His team's new study, published today in Science2, leaves no room for doubt, Danishefsky says. The researchers have incorporated much larger sugars, which are more representative of those that occur naturally. Indeed, the techniques that succeeded in the 2012 synthesis utterly failed with the larger sugars. “We had to start over,” he says: “Back to the drawing board, but not back to the cave.” Three mice injected with the new synthetic EPO showed bursts in the numbers of young red blood cells that rivalled levels in those injected with Procrit, a commercial EPO.

Scientists contacted by Nature uniformly applauded the technical feat of stringing together all the 166 amino-acid building blocks in EPO, but they expressed concern about whether the team had produced pure glycoforms, properly folded. Biological chemist Carlo Unverzagt of the University of Bayreuth in Germany notes that the purity of their chemical building blocks decreased with each step of synthesis, and that the researchers failed to obtain a mass spectrum of the final folded protein. Without knowing for certain how much EPO was synthesized, their comparison of activity with commercial epo is unreliable. “Biological activity of the final product alone cannot be viewed as a measure of purity,” he says.

Danishefsky feels stung by the criticisms. “It’s a very tough crowd,” he sighs. “We never said it is absolutely pure, but it is one glycoform.” He argues that it is unfair to criticize their failure to obtain a mass spectrum, because no one has obtained a mass spectrum of natural EPO — only of its mutated, simplified forms. “It’s a little bit like saying, why didn’t Lindberg also fly across Europe?”