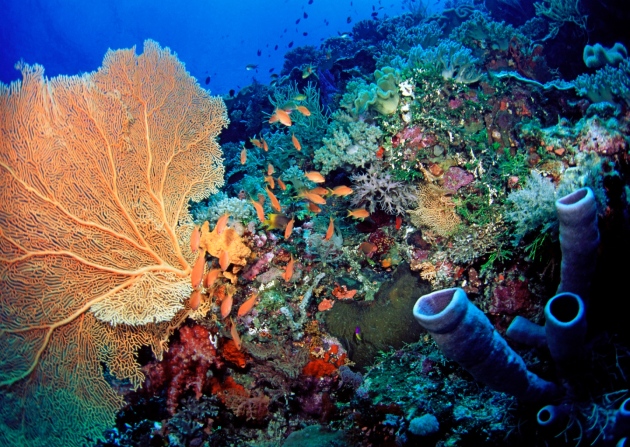 Tropical coral reefs will be among the first ecosystems to shift to a climate hotter than any conditions of the past 150 years.

The Indonesian city of Manokwari is poised to become an unwitting icon for climate change. In about 2020, the coastal location will become one of the first places in recent history to adopt an entirely new climate — one in which its coldest years will be consistently hotter than any of the past 150 years.

That is one finding of a study published today in Nature1, which attempts to create a region-specific index of climate change. Researchers sought to identify the point at which temperature oscillations in each area will exceed the bounds of historical variability. Such ‘climate departures’ are predicted to start in the tropics and then spread to higher latitudes. If carbon dioxide emissions continue unabated, Earth’s mean climate could depart from historical averages in 2047.

“Very soon, extreme events will become the norm,” says lead author Camilo Mora, an environmental researcher at the University of Hawaii at Manoa.

Because temperatures in the tropics vary little between seasons, even a slight increase in the average temperature could lead to unprecedented conditions — with negative consequences for ecosystems that are home to much of the world's biodiversity. Many tropical nations also have limited economic capacity to adapt or otherwise respond to such threats.

“The rules of the climate game — those governing everything from species interactions to frequency of large storm events — are changing,” says Jack Williams, a palaeoclimatologist at the University of Wisconsin–Madison, who was not involved in the study.

Most climate projections focus on the timing of absolute temperature changes — such as predictions of when to expect Earth to have warmed by an average of 2 ºC compared with pre-industrial times. But little is known about the timing of regional climate shifts.

To establish the historical bounds of climate variability, Mora’s team used 39 climate models to assemble projections on 7 environmental variables, such as near-surface air temperature and precipitation, for the years 1860–2005. The researchers then ran simulations for the next 100 years to identify the years in which climate variables are predicted to exceed historical limits in various locations.

They found that aggressively cutting greenhouse-gas emissions to stabilize the level of carbon dioxide in the atmosphere would delay the timing of Earth's overall ‘climate departure’ by 22 years, until 2069. “Twenty years is not a lot of time, but it could be a window of opportunity to prepare ourselves to adapt to these new climate conditions,” says Mora.

Evidence from recent years suggests that some tropical species, which are used to only limited climate variation, will be more sensitive to rapid changes in climate than species in areas that experience a wide array of conditions2.

But it is not clear which species will be hardest hit, says Sean McMahon, a forest ecologist at the Smithsonian Environmental Research Center in Edgewater, Maryland. “This paper very clearly shifts the discussion from ‘if’ the climate will have an impact to ‘when’ it will have an impact — and serves as a call for scientists to use regional climate projections to predict specific impacts on biodiversity,” he says.

Williams agrees. “This study will help identify the emergence of novel climates — but to determine species’ ability to survive climate change, it will be important to look deeper back in time to determine species' responses to past ice ages,” abrupt warming and other extreme climate shifts, he says.