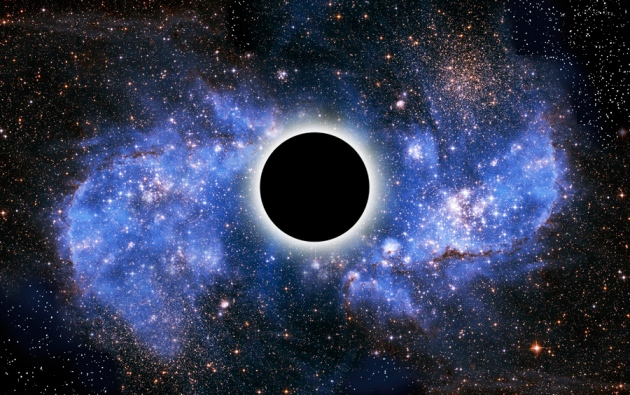 It could be time to bid the Big Bang bye-bye. Cosmologists have speculated that the Universe formed from the debris ejected when a four-dimensional star collapsed into a black hole — a scenario that would help to explain why the cosmos seems to be so uniform in all directions.

The standard Big Bang model tells us that the Universe exploded out of an infinitely dense point, or singularity. But nobody knows what would have triggered this outburst: the known laws of physics cannot tell us what happened at that moment.

“For all physicists know, dragons could have come flying out of the singularity,” says Niayesh Afshordi, an astrophysicist at the Perimeter Institute for Theoretical Physics in Waterloo, Canada.

It is also difficult to explain how a violent Big Bang would have left behind a Universe that has an almost completely uniform temperature, because there does not seem to have been enough time since the birth of the cosmos for it to have reached temperature equilibrium.

To most cosmologists, the most plausible explanation for that uniformity is that, soon after the beginning of time, some unknown form of energy made the young Universe inflate at a rate that was faster than the speed of light. That way, a small patch with roughly uniform temperature would have stretched into the vast cosmos we see today. But Afshordi notes that “the Big Bang was so chaotic, it’s not clear there would have been even a small homogenous patch for inflation to start working on”.

In a paper posted last week on the arXiv preprint server1, Afshordi and his colleagues turn their attention to a proposal2 made in 2000 by a team including Gia Dvali, a physicist now at the Ludwig Maximilians University in Munich, Germany. In that model, our three-dimensional (3D) Universe is a membrane, or brane, that floats through a ‘bulk universe’ that has four spatial dimensions.

Ashfordi's team realized that if the bulk universe contained its own four-dimensional (4D) stars, some of them could collapse, forming 4D black holes in the same way that massive stars in our Universe do: they explode as supernovae, violently ejecting their outer layers, while their inner layers collapse into a black hole.

In our Universe, a black hole is bounded by a spherical surface called an event horizon. Whereas in ordinary three-dimensional space it takes a two-dimensional object (a surface) to create a boundary inside a black hole, in the bulk universe the event horizon of a 4D black hole would be a 3D object — a shape called a hypersphere. When Afshordi’s team modelled the death of a 4D star, they found that the ejected material would form a 3D brane surrounding that 3D event horizon, and slowly expand.

The authors postulate that the 3D Universe we live in might be just such a brane — and that we detect the brane’s growth as cosmic expansion. “Astronomers measured that expansion and extrapolated back that the Universe must have begun with a Big Bang — but that is just a mirage,” says Afshordi.

The model also naturally explains our Universe’s uniformity. Because the 4D bulk universe could have existed for an infinitely long time in the past, there would have been ample opportunity for different parts of the 4D bulk to reach an equilibrium, which our 3D Universe would have inherited.

The picture has some problems, however. Earlier this year, the European Space Agency's Planck space observatory released data that mapped the slight temperature fluctuations in the cosmic microwave background — the relic radiation that carries imprints of the Universe’s early moments. The observed patterns matched predictions made by the standard Big Bang model and inflation, but the black-hole model deviates from Planck's observations by about 4%. Hoping to resolve the discrepancy, Afshordi says that his is now refining its model.

Despite the mismatch, Dvali praises the ingenious way in which the team threw out the Big Bang model. “The singularity is the most fundamental problem in cosmology and they have rewritten history so that we never encountered it,” he says. Whereas the Planck results “prove that inflation is correct”, they leave open the question of how inflation happened, Dvali adds. The study could help to show how inflation is triggered by the motion of the Universe through a higher-dimensional reality, he says.