Cryo-EM facilities are exponentially improving protein resolution for structural biologists. Access to this vastly expensive equipment is subject to the availability of highly skilled operators. 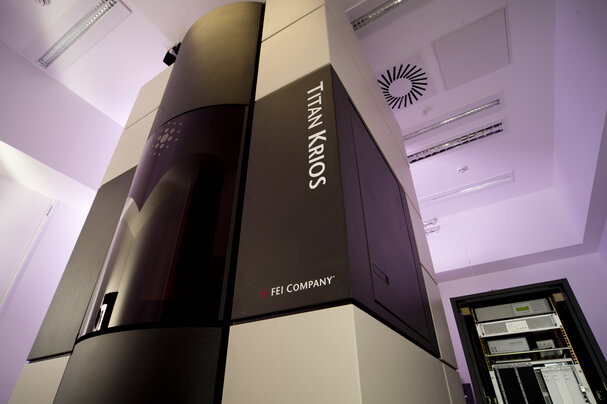 A cryo-electron microscope at the Laboratory of Molecular Biology in Cambridge, UK.

When structural biologist Joaquin Ortega was offered a position at McGill University, Montreal, Canada, in 2017, it was an easy decision. “The cryo-electron microscopy facility at McGill was the reason I moved here,” Ortega says. “I packed up my whole lab, no questions asked.”

McGill’s Facility for Electron Microscopy Research (FEMR), which Ortega directs, houses a state-of-the-art cryo-electron microscope, the Titan Krios 300 kV cryo-EM. “To be in the structural biology game these days, you need access to a top tier cryo-EM machine,” he says.

In their latest iteration, powerful 300 kV cryo-electron microscopes such as the Titan Krios now routinely determine the 3D-shapes of proteins down to their component amino acids, a boon for biomedical research. Detailed structural information on protein drug targets – such as proteins produced by pathogenic bacteria or viruses – can expedite drug discovery.

Previously, this level of structural information was only available by x-ray crystallography, a technique that could not be used for the many proteins that do not crystalize.

“The boost in productivity in my lab, even through the pandemic, has been huge,” Ortega says. “Many more papers, more high-value collaborations, and competitive grant applications.”

According to a 2020 survey of 44 senior officers at US universities published by Ithaka S+R, a not-for-profit research and strategic consulting service, the latest cryo-EM is the ‘hot, new’ sought-after piece of infrastructure.

“At least half a dozen interviewees told us, unprompted, about their efforts to secure one or more Cryo-EMs for their institutions,” according to the survey report’s authors, Oya Rieger and Roger Schonfeld.

Cryo-EM researchers continue to push the boundaries of what their machines are capable of.

In October 2020, atomic resolution was achieved with cryo-EM for the first time, showing that they could discern the structure of the apoferritin protein down to its individual atoms. Three different Titan Krios machines were used.

The technique is already contributing to real-world solutions, such as SARS-CoV-2 vaccine development. However, the jaw-dropping results that these machines can produce by are matched by the eye-watering cost of owning and running one.

The Can$10 million (US$8 million) costs for purchase and subsequent upgrade of McGill’s Titan Krios were partially covered by grants from the Canadian Foundation for Innovation. The university spent a further Can$4 million to renovate the FEMR building to accommodate the 4.5-metre-tall instrument. It costs about Can$500,000 a year to run, including salaries of the personnel needed to operate it, Ortega says.

Not every institute can meet such a high cost. The result is a buyer’s market for access to the machines, and a seller’s market of institutions keen to rent them out to help pay the running costs.

“The instruments and their upkeep are very expensive, so groups are keen to make time available to get money in,” says Matthias Floetenmeyer, manager of the Cryo-Transmission Electron Microscopy Facility at the University of Queensland in Brisbane, Australia.

The degree of difficulty for outside researchers to gain access to a cryo-EM machine can depend on arrangements made between institutions, notes Ortega.

However, in many jurisdictions, top-end 300 kV instruments are considered national research infrastructure, so any scientist from within the jurisdiction can apply for time with them. In Canada, for example, the three Titan Krios machines currently in operation are spread across the country and are all open-access. “The fee-for service model helps to pay the bills,” Ortega says.

Open-access cryo-EM facilities have been established across the world, such as in the US National Institutes of Health-funded centres, the European Molecular Biology Laboratory and the RIKEN SPring-8 centre in Japan.

The Nanyang Technological University (NTU) in Singapore has funded a 300 kV Cryo-EM facility itself, and makes it available to other institutions in Southeast Asia, in the absence of a national or regional infrastructure funding platform.

“We think the facility should serve the region,” says Yeng Ming Lam, who directs NTU’s Facility for Analysis Characterisation Testing and Simulation (FACTS). “We work closely with our users to help them factor in usage costs when applying for grants,” she says.

User access fees only partly cover the instrument’s running costs, but the flow-on benefits to the university of possessing the machine are significant, says Tim White, associate vice president for infrastructure and programmes at NTU.

“About 50% of funds that come into NTU, hundreds of millions of dollars, rely on the FACTS infrastructure to win those competitive funds,” he says. Very good infrastructure also helps with academic supervisor and student recruitment, he adds.

The increasingly sharp images captured by 300 kV instruments, thanks partly to a breakthrough in electron microscope detector design, which enables direct detection of electrons, rather than the imperfect process of first having to convert them into photons, has created buzz around the latest model cryo-EMs. But these behemoths do not make up the bulk of cryo-EM machines.

In Australia, there are open-access 300 kV instruments in Melbourne, Brisbane and Wollongong, but a network of lower-powered feeder instruments is distributed around the country – many as part of the government-funded Microscopy Australia consortium.

“We don’t allow people to go straight on to the big instrument, we protect its time for really advanced projects,” says Georg Ramm, who leads the Monash Ramaciotti Centre for Cryo-Electron Microscopy.

Only when a sample is looking good on a feeder machine can users step up to the Titan Krios. “There is quite a bit of demand for the 300 kV machine, but it is not difficult to get time on it. The critical thing is having protein samples ready and optimised.”

Floetenmeyer agrees that sample preparation is a major bottleneck. “People have lots of ideas, but bringing them into the microscope and getting useful data is a lot of work. Protein purification for cryo-EM is a steep learning curve,” he says.

Highly experienced platform scientists and support staff are critical to success in cryo-EM-dependent research, not only for instrument care and aid with data analysis, but for their help in coaxing protein samples into readiness.

As well as getting the protein sample to a highly pure state, the critical process is plunge-freezing the sample in liquid ethane to produce a fine disc of ice, 30-50 nanometres thick, with the protein evenly distributed within it.

“To make such thin, homogenous aqueous films, with randomly oriented and nicely spaced proteins at a high density, without touching each other is a piece of manual artwork, a job for an experienced craftsperson,” says Roger Wepf, director of the University of Queensland Centre for Microscopy and Microanalysis.

“In terms of the capability, it is probably less about getting time on the instruments, and more about the people who support those instruments,” says Lisa Yen, chief operating officer of Microscopy Australia.

Skilled operators are in high demand, Ramm notes. “As more institutes build up these facilities, it is difficult to get and retain good people,” he says.

At McGill, the salary offered is 10 to 15% above that for operators who run other types of microscopes, says Ortega – about CAN$100,000 including benefits. “This reflects the fact that being a Titan Krios operator is a demanding job,” he says.

The machine operates seven days a week, and running it while supporting and training users is a mammoth task. Other microscopes may have quiet days, but not a 300 kV cryo-EM, Ortega adds.

Bespoke career paths are needed to attract and retain cryo-EM facility scientists, according to White. “It is a distinct set of people, who are very technically able and extremely competent – and critical to putting out papers and winning the grants,” he says. “But they are there to support of the research of others, rather than their own research. We are working hard to create a career path for these people.”

However, with cryo-EM scientists now pushing on to the next frontier, capturing the structure of proteins, and potentially even protein-drug interactions, in their native environment in the cell, demand for cryo-EM does not look set to freeze up any time soon.