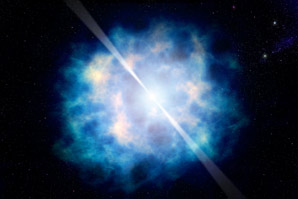 Mysterious radio bursts that are as intense as they are brief could originate from the explosions of a particular type of neutron star, two astrophysicists at the University College Cork propose.

Discovered just over a decade ago, fast radio bursts are intense pulses of radio waves that last milliseconds and are often so bright they outshine all the stars in a galaxy. Since their discovery, around 100 fast radio bursts have been observed all over the night sky.

Although a range of different sources — from mergers between neutron stars and black holes to extragalactic pulsars — have been suggested, their origins have remained a mystery.

By investigating the physical conditions necessary to produce the emission of fast radio bursts, the two scientists have proposed that explosions from weakly magnetized neutron stars that have grown larger through the accumulation of matter as possible candidates for their creation.