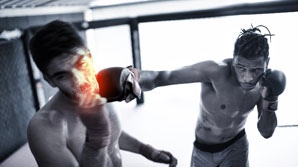 Immune cells protect us from external threats, but when it comes to traumatic brain injury, they seem to make things worse. A German-US team, including Genentech Inc. researchers, has now shown that blocking the infiltration of immune cells from elsewhere in the body could reduce the long-term consequences of brain injury.

Repeated concussions can result in long-term damage to the whole brain – not just the site of injury, and an increased risk of dementia. To investigate this, the team subjected mice to moderate brain injuries and observed them during subsequent weeks and months.

The researchers found that any major loss of brain tissue occurred during the first few weeks close to the injured site. This was followed by more widespread inflammation in distant brain regions caused by infiltrating immune cells, and changes to some of the localized neurons. Blocking a receptor that helps recruit immune cells to the brain reduced some of this longer-term damage.