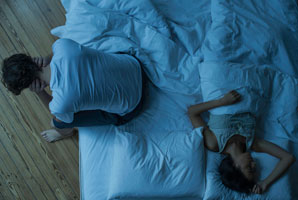 The circuit behind a bad sleep has been found in the brain’s stress response centre.

Strong emotions such as anxiety can keep us awake at night, but the brain activity behind this stress-induced insomnia is unknown. A team including researchers from Kanazawa University studied the role of a region of the brain called the bed nucleus of the stria terminalis (or ‘BNST’), which is linked to stress response, anxiety and fear.

When the team stimulated a group of neurons in the BNST of sleeping mice, the mice awoke immediately, with no evidence that orexin, a chemical typically responsible for wakefulness, had played a role. This indicated that when excited, the BNST neurons bypassed the normal reactions that control sleep and triggered arousal.

This study could help develop drugs for sleep disorders such as insomnia, the authors say.