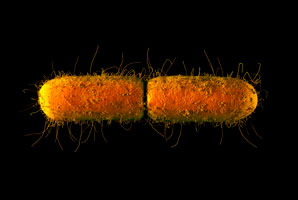 A new study shows that an enzyme’s role in helping bacteria cope with DNA damage differs from what scientists previously thought.

Researchers from the University of Wollongong in Australia, and US colleagues tagged DNA polymerase IV (pol IV) with a fluorescent molecule to observe, in real-time, where it goes within live Escherichia coli cells after their DNA is damaged with substances like the antibiotic ciprofloxacin, or ultraviolet light.

DNA polymerases help bacterial cells tolerate damage. It was thought pol IV does this by helping the DNA replication machinery, called the replisome, replicate past the damaged site in a process called translesion synthesis. Enzymes involved in this process are highly error prone, which can lead to increased mutation rates in bacteria, fuelling the evolution of antibiotic resistance.

The team found that, when DNA was damaged, only a small proportion of the pol IV enzymes gathered at replisomes. Those that gathered, stayed only temporarily. The results indicate that pol IV promotes cell tolerance to DNA damage mainly through roles outside the replisomes, contrary to conventional thought.