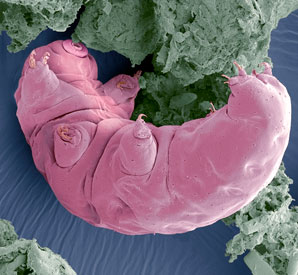 The apparently indestructible tardigrade, or ‘water bear’, can famously survive extreme conditions, such as freezing, dehydration, and even the vacuum of space, but the genetic origins of its endurance was unknown.

A team including researchers from Keio University studied the full genome of two tardigrade species, Hypsibius dujardini and Ramazzottius varieornatus, that can survive being completely dried out. They find that both species replace the water in cells with proteins which prevent the cells from collapsing. However, while R. varieornatus responds immediately to desiccation, H. dujardini only survives gradual drying, suggesting it must first activate the genes that produce the protective proteins.

These proteins that protect dried cells in tardigrades could be used to preserve cells in products, such as vaccines, that need a long shelf-life.