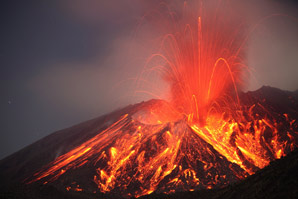 Two volcanoes that erupted tens of thousands of years ago could be behind one of the world’s oldest surviving folk stories.

Aboriginal Australians traditionally use tales of fantastic beasts to explain ancient natural events, but it is feared that many stories were lost when European invaders banned native languages.

Now, a team that included researchers from Curtin University in Western Australia has used precision argon–argon dating on volcanic rocks from around Budj Bim and Tower Hill in southeast Australia. They found that both volcanoes once erupted around 37,000 years ago. The sudden appearance of these fiery peaks may have inspired a tale told among the region’s Gunditjmara people that Budj Bim was a giant who emerged from the ground and that lava flowed from his teeth.