Laurentian crust in northeast Australia: Implications for the assembly of the supercontinent Nuna 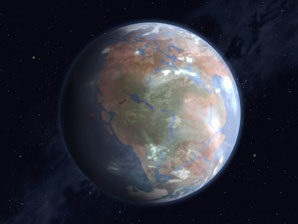 Similarities between rocks on both sides of the planet give new clues to the makeup of the ancient supercontinent Nuna.

Recent analysis of the Earth’s magnetic field has led geologists to postulate that nearly all of the continents were fused together roughly two billion years ago. Now, a team based at Curtin University has identified a rock formation once shared by Australia and North America in this supercontinent.

The Georgetown Inlier, located along a peninsula in northern Queensland, Australia, is a zone of very old sedimentary deposits. Using radioactive isotope data, the researchers discovered that the Georgetown rocks had magma exposure signatures similar to those found along the coast of Canada’s Yukon Territory.

These radioisotope measurements, together with an analysis of ancient water flow, led the team to conjecture that the Georgetown Inlier broke away from Nuna 1.7 billion years ago and crashed into Australia 100 million years later.