New clues from Earth’s most elusive impact crater: Evidence of reidite in Australasian tektites from Thailand 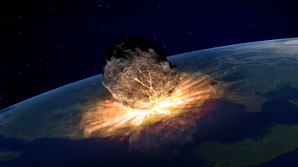 Glassy rocks found in Thailand formed under rare conditions that suggest they came from a nearby asteroid impact.

An asteroid many kilometres wide hit Earth nearly 800,000 years ago, scattering debris across Asia, Australia and Antarctica. But the trademark crater has never been found. A team including researchers from Curtin University studied the chemical compositions of three tektites — glassy deposits created during meteorite impacts — from Thailand, within the range of scattered debris. They observed a unique angular alignment of crystals in the tektites, which indicate that the crystals had rapidly turned into a rare mineral called reidite and back again. This transformation requires phenomenal pressures and temperatures, such as those generated by an asteroid impact. The finding, combined with the large size of tektites in Thailand, suggests the asteroid struck within Southeast Asia.

Examining tektites from the whole region could help researchers home in on the elusive crater, which they hope will reveal how the impact affected life nearby.