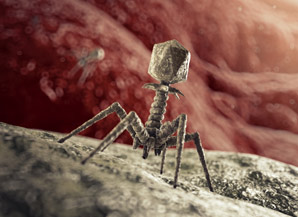 The biochemical pathway behind an alternative DNA alphabet that some bacteria-infecting viruses use to encode their genomes has been determined for the first time.

Some bacteriophages write their genomes using a building block called 2-aminoadenine (Z for short) instead of adenine (A), but it was unclear how the ‘Z-DNA’ was made.

Now, a ShanghaiTech-led team has detailed the enzymatic steps in the unusual nucleotide’s biosynthesis. They have also identified dozens of bacteriophages that harbour this enzymatic pathway, which presumably evolved as a way for the viruses to thwart bacterial defences.

The findings could help explain the origins of life on Earth, aid the search for life on other planets, and open new applications in biomedicine and biological computing.

“Scientists have long dreamed of increasing the diversity of bases,” the authors write in Science. “Our work shows that nature has already come up with a way to do that.”