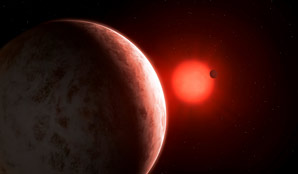 Nearby exoplanets are promising places to look for life outside our Solar System, but those with habitable conditions are rare.

A team that included researchers from the Spanish National Research Council used the High Accuracy Radial Velocity Planet Searcher in Chile to study a red dwarf star just 10.7 light years away. Radial velocity measurements of stars can be used to detect tiny wobbles in their motion caused by the gravitational tug of orbiting planets.

The team identified two exoplanets orbiting the star every 9 and 22 days. The relatively cool star has low flaring activity, but even if the more distant planet had an Earth-like atmosphere, it would be a toasty 80 degrees Celsius.

The signals also hint at a third planet circling the star in a more temperate orbit, which may be confirmed during further investigations of the system.