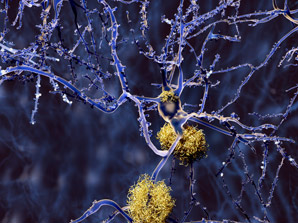 The hyperactivation of some neurons — considered to be a key feature of early stage Alzheimer’s disease — has been traced to the neurotransmitter glutamate in a mouse study.

Long before people with Alzheimer’s disease exhibit memory loss, some neurons in specific areas of their brains become hyperactive. But it has been unclear what role this hyperactivation plays in the development of the disease.

Now, a team led by researchers at the Technical University of Munich has found the glutamate resides too long in the synapses between active neurons in mice, causing the neurons to become overstimulated.

This neurotransmitter blockade was mediated by a small, soluble form of beta-amyloid, which forms plaques that characterize the later stages of Alzheimer’s disease.

These insights promise to open up new ways to treat the neurodegenerative disease.