Deep conservation of the enhancer regulatory code in animals 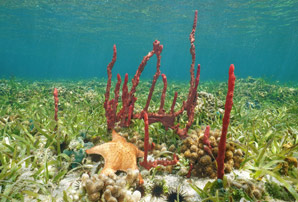 DNA regulatory elements that drive target gene expression are widely conserved across the animal kingdom, with functions shared even among species as distantly related as sponges and mice.

During development, short regulatory motifs known as enhancers help control when, where and how much a gene gets turned on.

Enhancers evolve quickly, though, and so their DNA sequences are rarely maintained from one animal to the next.

Despite that, a team led by University of Queensland scientists has now found that their roles in determining cell fate are often preserved across animal evolution.

The researchers inserted enhancer sequences from a marine sponge into transgenic zebrafish and mouse embryos. Despite 700 million years of independent evolution between the vertebrates and the sponge, the regulatory machineries of both the zebrafish and the mouse could correctly interpret the genetic information in a cell-specific manner.