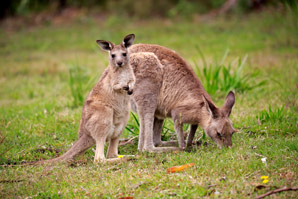 Ancestors of the modern kangaroo hopped onto the scene at least 25 million years ago and have adapted as climate change altered their menu.

Australia is home to almost twice as many kangaroos as people, yet it remains unclear how and when these national icons evolved.

Two researchers from Flinders University studied the size and shape of more than 1,000 modern and fossilized kangaroo teeth, some of which were up to 25 million years old.

When the pair created an evolutionary timeline of the teeth, they found that the teeth began to grow around 3 million years ago, lengthening by up to 40% in as little as 3 million years. The short teeth of earlier kangaroos were suited to nibbling the leaves of trees and shrubs, suggesting the elongation was in response to the expansion of rough grasslands around this time.

The findings suggest that even short-term climate swings could change a region’s ecology enough that animals must adapt to a new diet.