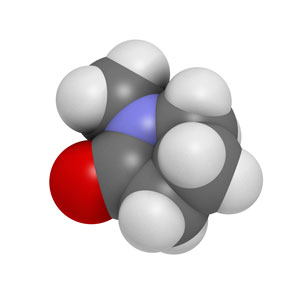 Cyclic, nitrogen-containing structures called lactams are well known for their medicinal properties. A whole family of antibiotics is based on four-membered lactam rings. The five-membered lactam ring, however, is notoriously hard to synthesise. Now, guided by density functional theory, KAIST researchers have developed a catalyst that can selectively deliver these sought-after structures.

The challenge with forming catalytic five-membered lactam structures has been a competing reaction pathway. When the catalyst binds to the nitrogen-containing lactam precursor, this reactive intermediate typically decomposes to form a linear structure called an isocyanate rather than cyclizing to give the desired lactam.

After studying this competing reaction pathway in detail, the KAIST team designed a set of iridium catalysts that highly favour lactam formation over isocyanate formation. The catalysts were able to incorporate five-membered lactam rings into a wide range of molecules of potential medical interest.