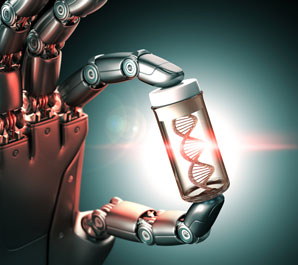 Research led by scientists from the Technical University of Munich has showed how to manipulate a DNA-based nanoscale robotic arm a hundred thousand times faster than previously possible, using an external electric field. The discovery is a step towards nanorobotic production lines that construct nanoscale and molecular devices.

The robotic arm is 25 nanometres long, but can extend out to 400 nanometres. It comes attached to a 55 x 55 nanometre DNA platform, which also features DNA-based ‘docking stations’ that lock the arm into position. Attempts to manipulate a DNA-based robotic arm like this one previously relied on molecular interactions, which were very slow, or used light or magnetic ‘tweezers’, which required direct contact with the robotic arm.

The team found that using electric fields increases the speed of manipulation by five orders of magnitude, taking just milliseconds to move between positions, and is likely to be a cheaper method.