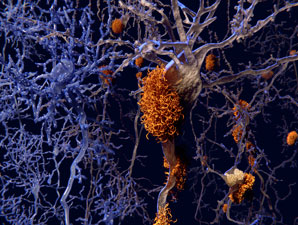 The same tau protein that forms the twisted tangles involved in Alzheimer’s disease may actually help protect against neurodegeneration when in a different form.

The finding, from an Australian team led by University of New South Wales scientists, challenges the prevailing view that tau always worsens Alzheimer’s disease, and suggests that stopping tau from turning rogue could help prevent or treat the condition.

The researchers pinpointed an enzyme called p38γ kinase that influences that way molecules known as phosphates are attached to tau. These phosphate adornments are usually toxic, and eventually prompt tau to form tangles, but one particular pattern of phosphate tagging on tau protected against neuron death and memory loss in a mouse model of Alzheimer’s disease.

"This is a completely new mindset; that the reason tau becomes modified is actually to protect from damage," said lead author, Lars Ittner, in a statement.

The team also found that, in humans, levels of p38γ decline as Alzheimer’s progresses, further indicating that boosting the activity of this enzyme to make more protective tau could have therapeutic value.