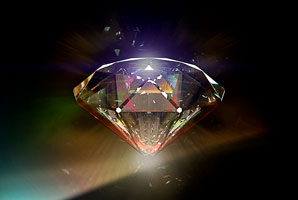 A team including researchers from the University of Tsukuba investigated whether electrons, the information messengers in electronic devices, can be controlled in electric fields oscillating at petahertz (1015 hertz) frequencies. They excited the electrons in a tiny diamond by blasting it with an infrared laser beam for a few millionths of a billionth of a second, moving them to the ‘energy band’ where conduction can occur. They then applied an even faster flash of ultraviolet light to test whether the electrons in the diamond reacted. The team detected an increase in the diamond’s absorption of UV, which showed that the electrons had indeed been bumped into the conduction band.

Controlling electrons at the speed limit of laser fields could improve the performance of numerous information technologies including biosensors, the authors suggest.