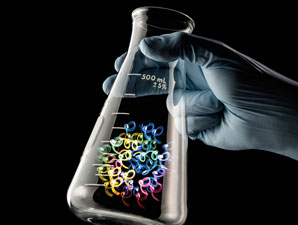 The carbon-hydrogen (C-H) bond is a core feature of organic chemistry, yet relatively few reactions are precise enough to target one C-H bond in a molecule that many contain dozens.

Researchers at the University of Chinese Academy of Sciences (UCAS) and colleagues have now developed a ‘radical relay’ reaction that selectively targets C-H bonds involving carbon atoms that bond to three other atoms.

First, a highly reactive radical plucks off the target hydrogen atom, which allows a copper-based catalyst to put a nitrile (CN) group in its place. The catalyst then regenerates and initiates the next reaction cycle.

Crucially, the catalyst only adds CN to one of the target molecule’s faces, preferentially creating one of the product’s two mirror-image forms, which enabled the team to prepare a range of precursors to hormones, neurotransmitters and anti-inflammatory drugs.