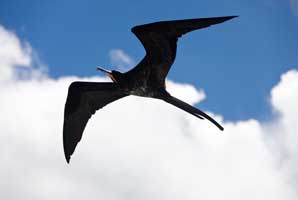 Frigate birds can stay continuously aloft for an astonishing two months, according to a study published in Science.

Frigate birds hunt by plucking prey from the surface of the ocean in transoceanic journeys spanning 1000s of kilometres. Unlike other seabirds, their feathers are not waterproof so they can’t rest on the water’s surface.

To work out how they stay continuously airborne, an international team, including a researcher from TUM, tagged 49 great frigate birds on Europa Island, off the coast of Madagascar and measured GPS, cardiac frequency and wing beats.

They found the birds were able to conserve energy by using a ‘roller-coaster’ flight path — flapping their wings infrequently and instead using wind-drift circling to ascend 1000's of metres, followed by long periods of gliding. The researchers recorded two to twelve-minute intervals of low activity during ascents which could indicate the birds were taking a quick nap.