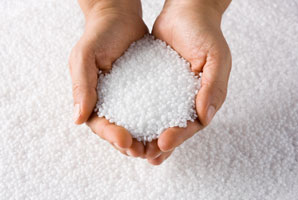 A family of porous materials can trap and store acetylene gas, which can be an industrial contaminant, much more effectively than conventional processes, according to a team including researchers from Zhejiang University.

The team’s metal-organic frameworks (MOFs) could be used to produce pure streams of ethane, a feedstock for many plastics, which is often contaminated by acetylene during the refining process. The MOFs contain copper atoms connected by carbon-based molecules, and hexafluorosilicate ions, which collectively form a three-dimensional scaffold.

Other MOFs have been able to either suck up large amounts of acetylene, or selectively adsorb traces of the gas from mixtures. But these are the first materials to combine both qualities, thanks to the strong binding between weakly basic hexafluorosilicate ions and weakly acidic acetylene.

One of the new MOFs purified a 99:1 mixture of ethene and acetylene so that the resulting gas stream contained less than 2 parts per million acetylene, far exceeding purity requirements for industrial polymerization processes.