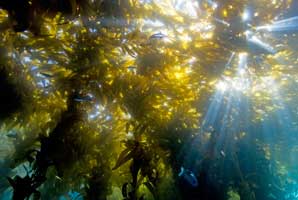 The Great Southern Reef spans 71,000 square kilometres off the southern fringe of the Australian continent, hosting unique temperate marine species. It contributes more than $10 billion to the Australian economy every year through fisheries and tourism.

An international team, which included researchers from Curtin University, conducted marine surveys between 2001 and 2015 to measure changes in the reef ecosystem.

They found that not only were 963 square kilometres of kelp forests devastated, but the warmer waters led to an influx of subtropical and tropical fish that made quick work of any kelp attempting to re-establish itself. The reef has not yet recovered.

"It really brought home to me the impact that climate change can have on these ecosystems, right under our noses," researcher, Scott Bennett, told The Atlantic.