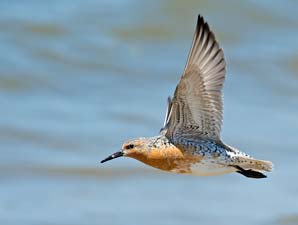 Continuous warming of the Arctic has altered the development of a migratory bird, affecting ecosystems half a world away.

A team of researchers at Deakin University and elsewhere discovered a change in the size of red knots over the past three decades. The snow in the birds’ Arctic breeding ground has melted slightly earlier each year. This leads to a discrepancy between the time red knot chicks hatch and when abundant food is available, incrementally stunting the growth of each generation of birds and leading to the development of shorter bills.

The juveniles remain small even after reaching their wintering grounds in Mauritania. Birds with short bills can’t reach their ideal mollusc food buried several centimetres in the sand and must instead subsist on roots and a less nutritious mollusc species found closer to the surface.

These findings demonstrate that climate change in one part of a migratory species’ range can decrease its fitness in another region.