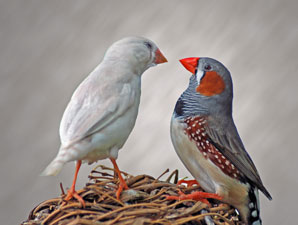 Listening to and copying their fathers’ crooning not only teaches juvenile zebra finches courtship songs, it hardwires them into their brains, according to a study published in Science.

A US-team, including a researcher from the City University of New York’s Hunter College, studied how listening to a ‘tutor’s’ song caused a spiking of nerve cells in juveniles’ premotor cortex, an area of the brain associated with imitation and learning. After the birds have mastered the song, a special type of nerve cells called inhibitory interneurons help make the tune a permanent memory by blocking outside influence.

“These inhibitory cells are really smart — once you’ve gotten a part of the song down, the area gets locked,” Michael Long, the senior author of the paper told The New York Times.

The team is planning to look more closely at how these interneurons work, hoping that the insights gleaned could eventually be useful for relearning complex behaviours after injury or stroke.