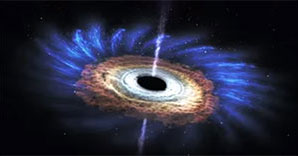 An international team has detected the gassy lunch remnants of an impolite supermassive black hole.

When a star has the misfortune to veer too close to the maw of a supermassive black hole, intense gravitational forces tear it to pieces. The resulting debris joins the disk of rubble orbiting the mouth of the black hole and is eventually sucked in.

Astronomers have known for a long time that a pulse of heat, known as a tidal disruption flare, accompanied the demise of such stars. But, this study, published in Science, is the first time observations were sensitive enough to detect the accompanying outflow from the black hole. This took the form of a brief, relativistic plasma jet — a bit like a hearty belch after a particularly stellar meal.

The energy released in the cosmic belch was equivalent to the Sun’s entire energy output over 10 million years. The team included researchers from Curtin University.