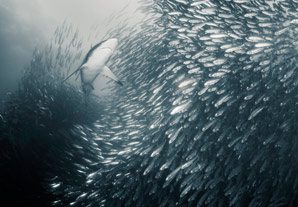 The annual migration of tens to hundreds of millions of sardines off the east coast of South Africa that culminates in a feeding frenzy for predators may be an ecological trap that doesn’t benefit the species.

There has been much speculation regarding why sardines participate in the mass migration, which has been dubbed ‘the greatest shoal on Earth’.

Now, a team led by researchers from University of Cape Town has found evidence that temporary water currents may trick the sardines into participating in a migration that offers them no long-term benefits.

The sardines may be deceived by brief cold upwellings that lead them to warmer waters and an armada of waiting predators, the researchers conjecture.