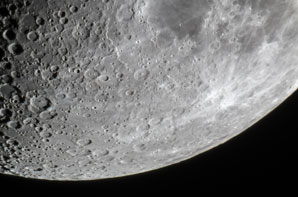 The Moon is slowing effusing carbon atoms into space — a discovery that may require revisiting theories regarding lunar origins.

Analysis of rock samples brought back by the Apollo lunar missions showed that they had hardly any carbon in them. This led to the theory that the Moon was formed when a Mars-sized object smashed into Earth, breaking off a large chunk that became the Moon. The heat of this collision would have burnt off any carbon.

But now a Osaka University–led team has analysed data from Japan’s Kaguya lunar orbiter and found that, on average, each square centimetre of the Moon’s surface emits roughly 50,000 ions a second.

This discovery suggests that carbon on the Moon has ancient origins and hence a new theory may be needed to explain how the Moon formed.